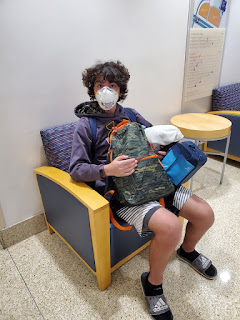 About two weeks ago, it seemed like Azer was going down hill again, the same way as has been happening all this year. He began becoming very fatigued in the morning to early afternoon, very cold, and increasingly congested. Saturday, he had a fever, and his lungs felt very full. His heart rate was high, and oxygen was low. The on call doctor said if the fever got worse to go to the ER, but he was stable through the weekend. This morning, his lungs felt so full, he could barely speak without a coughing attack. He has been coughing up a lot of mucus. It is extremely frustrating to feel like he is back in the same place as a month ago, with no answers at all. His cultures from his sinus surgery and bronchoscopy still don't show any slow growing bacteria or fungus. It was always that the bronch would be the final try to see what was really going on, and we feel stuck now. We are all hoping for relief for him and some insight.
on August 31, 2020