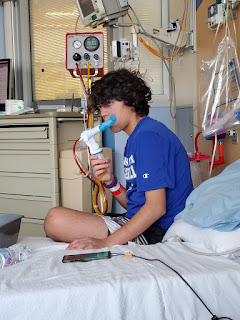 Azer's oxygen is low, and lung function is almost 30 points down from his year's best. His lungs sound congested and crackly. The RT said he's breathing shallow and fast. She's never seen him look this bad. They are continuously monitoring his oxygen saturation, especially while he sleeps tonight. If he's not able to keep his oxygen up, they may put him on oxygen tonight.
The doctors put in an order for two IV antibiotics, but they are to treat bacteria he used to grow. They are getting a culture today to see if he's growing anything new. He tested negative for all viruses including Covid 19, so it's not a virus making him so sick. He shouldn't be this sick after doing two weeks of antibiotics a month ago.
They don't know what it is that's making him so sick over and over. The PICC team tried to see if they can use his left arm, as his right arm has been used so much this year, it is causing the vein to scar much quicker. Unfortunately, they can't use the vein in his left arm. The PICC team was very patient and showed us that on the ultrasound, the vein disappears further up the arm. I asked a lot of questions about what would factor into the decision of getting a Port, since it was mentioned today, because of the fact that this is his 4th PICC line this year. Hopefully the PICC line goes in easy.
on August 31, 2020