Tuesday morning, Azer's cough just made me feel worried. Like that fear thing popping up, that it just wasn't getting better. So I called the on-call doctor before their offices opened (it's a sure guarantee of getting a hold of a doctor before 4pm). He said to come on in first thing in the morning. So I go rushing around, dropped Reema off at school, and drove straight to the clinic. As soon as I walk in, the nurse told me she ordered a bed, just in case we need it. As in, uh-hu, you might be admitted to the hospital. I'm thinking, yeah, I was prepared for this.

Well, tada! In another month he gained yet another pound. We have a 49ner. We are almost to 50 pounds. He grew and gained, and the doctor was amazed at how great he looked. Azer sounded wheezy, so they sent him to the PFT lab to get an albuterol treatment. His PFT's were 88%, which is better than the 76% last month. 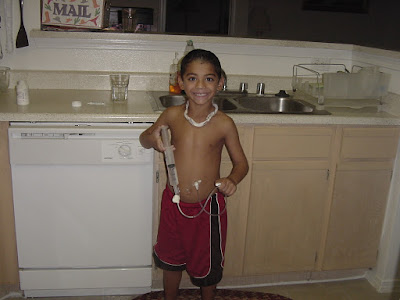 So, we went home with oral antibiotics for 10 days, and oral steriods for 5 days. The steriods have always worked quickly in the past, on improving his coughing. So far, his cough is still wet, but it seems to be clearing. Azer is really happy to have this G-button right now, because the steroids don't taste good at all, and we are pushing it through his G-tube. He is also very happy with the weight gain, and his extra strength he has now. He can pick up his sister! He looks like a big brother now, I think. 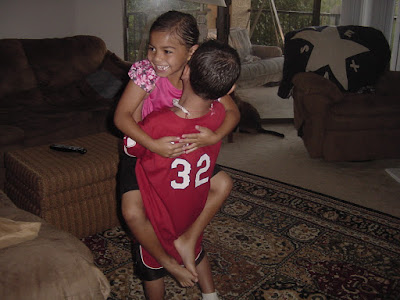 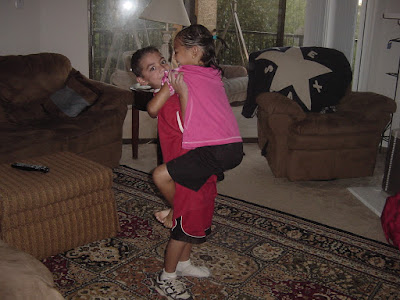 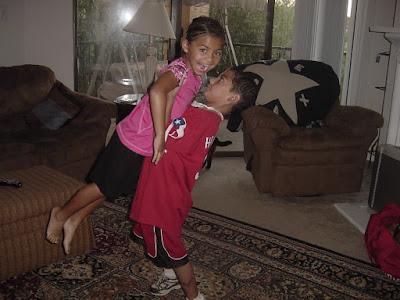 So, Azer's appetite has been pretty good. Well, he's actually eating food at meals. He looks really good to me. He looks heavier than another little boy his same height and age that he plays with. It makes me feel so happy that I don't see his ribs sticking out like I used to.

It's kind of cold here today in the lower 60's. Ever since Azer has had that cough, it just doesn't seem to go away completely. I'm worried, because the last three PFT's he's had, he's been in the 70's. I'm worried that maybe he has lost lung function, but I hope it can go back up again. But, I feel like he might need some IV antibiotics to really fix it. I just don't get it. He did a whole 2 weeks of Augmentin, orally. And he only has 4 more days of the Tobi to go. This morning, before his breathing treatment, I could actually hear mucus cracking inside his lungs, without even holding my ear to his chest. After the treatment, he sounded clear, and is not coughing. I'm sure his next culture will be free of Psuedomonas as well. So, I just don't understand, if there is no bad bacteria flaring up, why won't his lung function get any higher? There are adults that have PFT's way higher than him.

Besides everything, they are both doing great in school. Azer does not enjoy homework at all, but we're plugging away at it.

He has been enjoying fall baseball. He's been playing 1st base, just like last year, which he loves.

Reema is finally enjoying some sort of sport. This is her at her soccer game. I had to crop out the other kids for privacy purposes, but it makes me smile watching her get in between big, sweaty boys and getting the ball away from them. She is extremely girly, but doesn't seem shy about getting involved with a little tumbling. Of course, she had to ask if her hair clips matched her soccer uniform. *rolls eyes*
on September 26, 2010 2 comments:

Azer's culture came back clear of Psuedomonas, but his doctor wants Azer to continue with the Tobi. Azer's cough has been improving slowly. It has been very difficult waking up in the middle of the night to flush his tube, and to give enzymes at the end of the feed. Then, we have to wake up extra early because the Tobi takes FOR-EV-ER to finish. 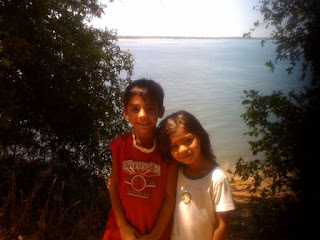 So, to make the most of the day, we wake up early on the weekends too. We went to the lake last week end, swam in the lake, rode bikes, and had a picnic. It was a great escape from the "home hospital". Lately Azer looks a lot taller than his sister. Thank you Lord and G-tube.
on September 09, 2010 3 comments:

So, remember how I said that at clinic on Tuesday, Azer had a bit of a wet cough? Well, yesterday, it scared me a bit because it just sounded terrible. Really junky sounding. I asked the school nurse to listen to him, and she said it sounded like he had good air exchange. I called the doctor, and I thought maybe they would bring him in to look at him, but the he realized that Azer had just started the oral antibiotics on Tuesday, and that it might take more time for them to take effect. His culture still hasn't come back yet as of yesterday. His doctor wanted Azer to start back on the Tobi again. The last time we tried Tobi, Azer had ringing in his ears, but that may have been from the IV tobramycin.

So, we did a Tobi last night, and no problems. Azer said the Tobi makes his mouth taste bad. I just hate it because it takes about 30 minutes to run it, which adds more time onto the treatment time that seems to just run forever sometimes.

I just heard of a new nebulizer called the Trio that can run Tobi in 2 minutes. Maybe I can ask the doctor about it at next visit. It looks like we have to wake up at 5:30 in the morning to get Azer's treatment done in time for school. Fun, fun, fun.
on September 04, 2010 1 comment: 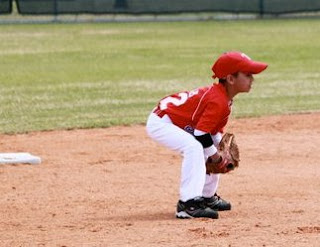 Azer's baseball season has been going great. I think he's learned a lot so far. He definitely has matured quite a bit from last spring. His throwing accuracy just amazes me. It's almost been a year since he got his G-tube, and I've noticed a lot more muscle mass on him. I think this contributes to his increased stamina while playing. Just the fact that he can run 3 miles, and then an hour later be running around playing catch is just plain amazing. 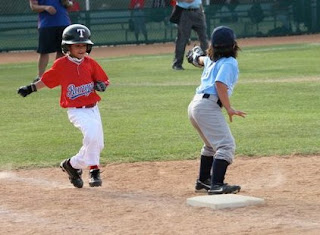 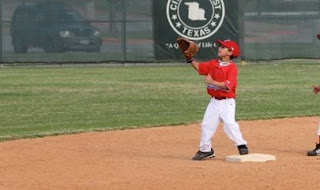 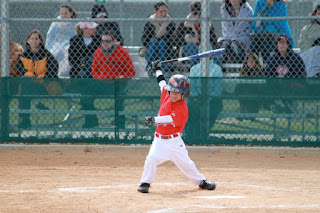 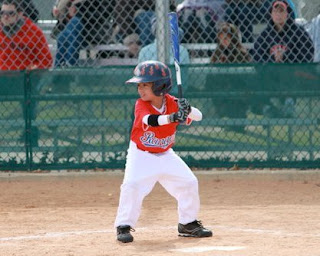 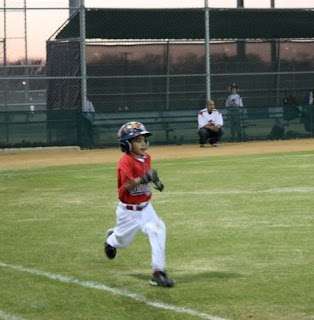 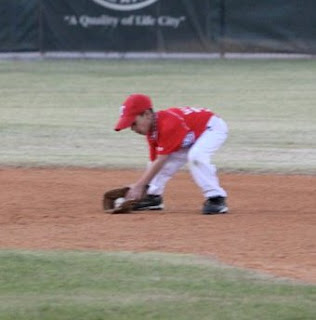 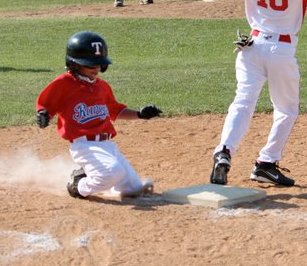 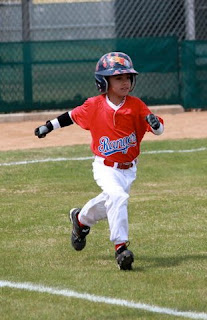 Yesterday was a routine CF clinic visit. I had to take Azer out of school as soon as we got there. Took us almost an hour to get to the hospital.

He gained a pound and a half, and grew another half a cm! Doctor said his lungs sounded clear, even though Azer has a wet cough. Azer also has a lot of sinus drainage right now, but most of his class has that as well, so it might be a virus. Azer's PFT's were only 76%. I would have liked to see it higher, but he does have the wet cough, so hopefully that is the reason. Doctor wants him on antibiotics for 2 weeks to see if that will help clear him up. They did do a throat culture (Azer calls it the gag test)

I've been sort of worried about CFRD (CF Related Diabetes) lately, as he has been drinking water and peeing constantly. So, they ran a glucose test on his urine, and it was normal. They also drew blood yesterday, so, hopefully that runs normal as well.

They have this new medical device called J-tip. http://www.jtip.com/  It is used for other medications, but we like it as when it is used with Lidocain, it causes the skin to be completely numb in about a second. So, I was hoping they had this in the lab before they drew his blood. It dramatically decreases Azer's anxiety about it. But in the lab, the technician said that they don't use it there, because only a nurse can administer it, because it is a medication. I know they have to follow policies for everyone's safety, but it's always difficult to see Azer crying and nervous over getting blood drawn. It was over in a few seconds, though, and he got a little toy and was ready to move on.


Azer was such a goof in the clinic. He was making jokes, and being really entertaining to all the staff. Our Child Life specialist came in and asked him if he'd like her to come to his class and talk to his class about CF. He's thinking about it. Azer is pretty good at telling other kids about CF, but most of the questions revolve around his G-button.

Azer was telling the different people in clinic yesterday that he really loves his Mic-Key button, and his happy he has it. Also, it's always great to hear from a nurse that we are doing a really great job with him. So, yay for a good clinic!
on September 01, 2010 2 comments: