So, Azer's appetite has been pretty good. Well, he's actually eating food at meals. He looks really good to me. He looks heavier than another little boy his same height and age that he plays with. It makes me feel so happy that I don't see his ribs sticking out like I used to.

It's kind of cold here today in the lower 60's. Ever since Azer has had that cough, it just doesn't seem to go away completely. I'm worried, because the last three PFT's he's had, he's been in the 70's. I'm worried that maybe he has lost lung function, but I hope it can go back up again. But, I feel like he might need some IV antibiotics to really fix it. I just don't get it. He did a whole 2 weeks of Augmentin, orally. And he only has 4 more days of the Tobi to go. This morning, before his breathing treatment, I could actually hear mucus cracking inside his lungs, without even holding my ear to his chest. After the treatment, he sounded clear, and is not coughing. I'm sure his next culture will be free of Psuedomonas as well. So, I just don't understand, if there is no bad bacteria flaring up, why won't his lung function get any higher? There are adults that have PFT's way higher than him.

Besides everything, they are both doing great in school. Azer does not enjoy homework at all, but we're plugging away at it. 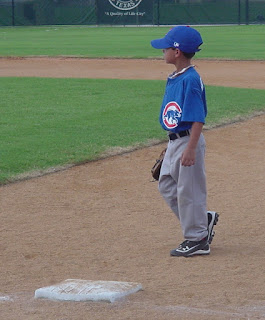 He has been enjoying fall baseball. He's been playing 1st base, just like last year, which he loves.

Reema is finally enjoying some sort of sport. This is her at her soccer game. I had to crop out the other kids for privacy purposes, but it makes me smile watching her get in between big, sweaty boys and getting the ball away from them. She is extremely girly, but doesn't seem shy about getting involved with a little tumbling. Of course, she had to ask if her hair clips matched her soccer uniform. *rolls eyes*
on September 26, 2010

Yay for no ribs sticking out!!! That is wonderful - and to NOT be the smallest boy in class - yay! :) So happy he's eating too. I'm sorry that anyone tried to make you feel bad about the g-tube. We all do what have to - and we know our kids better than anyone else (what they need & when). And look at Azer now - Good Job Mom!!!

As for the cough and the low pfts... I wish I could help. Hunter's were lower than normal too - it's so scary not knowing what going on. I can't remember - Does Azer do pulmozyme?

We used to only use it once, but when his cough was getting worse and staying worse, we bumped it up to 2x a day and it really helped. But, then we started HTN saline and went back down to only once a day...and now we have low pfts. Coincidence - very well could be. But, it might not be. Anyway, I called and asked the doc Fri if we could go back to pulmozyme 2xday AND use the HTN & he said it was a great idea. So - crossing my fingers this will help. This is FYI - incase you only use it once a day. Course, if you already use it 2x day - then forget my whole post LOL.

I really hope and pray he doesn't have to do IVs and that the low pfts are only temporary. :(

And, ps - I totally agree with Reema: matching hair accessories are essential! :D

So glad he's gaining weight! And you're right, it's tough getting up in the night on top of early mornings. Hope Azer's cough clears up. xoxo