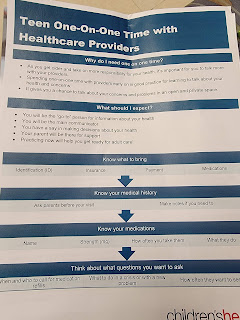 About two weeks ago, Azer started to cough a lot more, and his cough was becoming more productive. He couldn't tell if it was a virus or if the antibiotics just weren't working anymore. He contacted the clinic and he tried steroids for about a week. He said they seemed to work, but the day after he finished them, he was back to feeling pretty bad. The clinic said he could try a different oral antibiotic with increased treatments or he could be admitted. He decided to try the new antibiotic. Starting last Thursday, he was feeling so bad, he came home from school and slept the rest of the day. He woke up feeling cold and had a headache and sore throat. He did a PFT at home and it was almost 30 points down from his years best. He took the weekend off of work to rest and increase treatments. His pulmonologist was really wanting to admit him Tuesday. He wanted to stay home from school to do more breathing treatments, but started to feel better later on in the week.
At clinic Friday, his PFT was better than two weeks ago and much better than last Thursday. His doctor said he could finish out this course of antibiotics and then go back to the previous one. She said she would contact the infectious disease doctors to see if they have any advice or change of plans, since he still shows abundent MSSA in his sinuses and lungs. He has also cultured some rare growth fungus.
He lost a little more weight this time, as he has been doing less formula than the clinic recommends. At clinic, he is doing all the visits on his own now, and his doing a great job communicating with the entire staff about what works and doesn't work for him and his schedule.