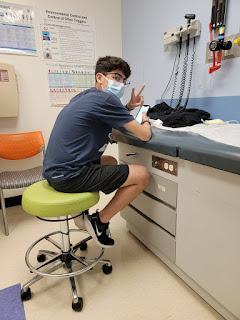 Azer has continued to have a constant cough, and is most productive in the morning. He told the doctor's today that he has continual drainage from his sinuses that gets better temporarily with nasal rinses. His lungs sound perfectly clear, even though his PFTs were significantly lower than last time. The culture that his ENT took last week showed abundent growth of MSSA. His pulmonologist decided to add a week of oral steroids, add additional antibiotics to his nasal rinses, to start a steroid nasal spray and to add another steroid inhaler to his breathing treatment. They plan to meet again in two weeks if he's not feeling better.
Azer also lost another pound from last week. He has been eating a lot more since they increased his appetite stimulant, but not been doing his morning g-tube feed. This hasn't been enough to maintain his weight, so the GI team worked with him to find ways that he could add calories and extra snacks into his day, especially in-between classes at school.
on March 23, 2021