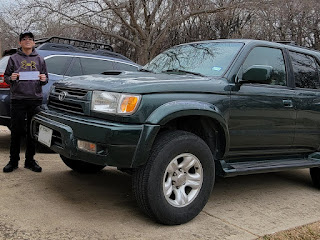 Azer had a three month follow up with ENT today. A few days after the weather got warmer, he developed a frequent, nagging cough. He said his secretions were pretty clear and that his lungs felt ok. He thinks it's probably allergies, as he hasn't developed chills or a fever.
The ENT doctor scoped him and said his sinuses looked pretty good compared to last time. He had some areas that showed the beginning of polyps, but overall it was clear. She collected a sample to send for cultures to make sure he isn't growing anything new in his sinuses.
The ENT doctor said he could increase the salt concentration in his nasal rinses, add antibiotics to them and to try a week of steroids to hopefully bring some relief to his constant coughing.
Azer is nearing the end of his three months on oral antibiotics for his staph infection. Since he's had both covid-19 shots and feels relatively stable, we all decided it was a good time for him to attend school in person for the last few months. He still only has the bare minimum class requirements, so if he does get sick between now and the end of school, his counselor and 504 plan will make it easy to transition back to virtual school if he needed it.
The picture is Azer holding his first paycheck in front of his car!
on March 17, 2021