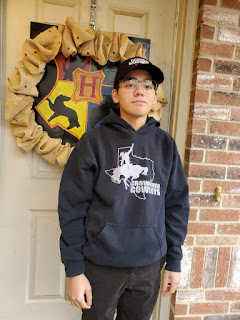 So, two weeks ago, Azer was supposed to have CF clinic in person, but because we had a high probability of sleet and snow, he requested a virtual appointment.
He did his PFT at home, and it was a little lower than when he got discharged from the hospital. He's been coughing up darker mucus again, but hasn't had any fevers or chills. His appetite wasn't great at all. The GI doctor increased his appetite stimulant and since then, he has been eating a lot better.
When the winter storms hit Texas last week, I was grateful that Azer had two battery powered nebulizers. We we're lucky that we had power off and on instead of having it shut off for days like others. We also never had the water shut off, but we did have several days of boiling water for safety.
Azer's future independency has been getting much better. He is in the process of having a vehicle being repaired for him to drive. He also has a job now and is almost completely caught up with last semesters past due assignments. Azer also received both Covid vaccines, which is a big relief for all of us.
on February 26, 2021