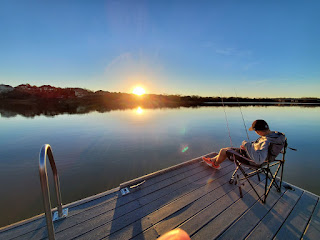 Azer finally had a good clinic day! His weight is stable, and his PFTs were only a little lower than they were when he got discharged from the hospital. The doctor said his lungs sounded clear and not crackly or wheezy. The very dark mucus that he coughed up before he got discharged came back, and there was no bacteria in it, which was interesting, as it was the darkest stuff he has ever coughed up.
Last week, a few days after Azer went fishing, he started to go downhill again. He began to cough up dark mucus, was exhausted and felt chilled. He didn't have a fever, and it seems that whatever this was went away after a few days. It seems lately that this has been a trend, that he feels worse after spending time around water, or outdoors for an extended period of time.
His doctor wants him to continue his antibiotic treatment, which would last three more months depending on how he feels. The timing on taking them is only three times a day, so it isn't too burdensome. It also hasn't been hard on his GI. He still hasn't had much of an appetite since the Nissen, but his stomach pain is getting better a little at a time.
A few months ago, the CF clinic's psycologist brought up the suggestion for Azer to go back on homebound instruction with the school. Normally, this is only an option when a student can't attend in person due to illness. Over this school year, it was becoming increasingly difficult for Azer to stay caught up. He spent so many weeks with a fever, and being so ill he was in bed all day, he fell so far behind, we didn't know what to do. He was also struggling finding the right ADHD medication that worked best for him, and doing Connected Learning while unmedicated was extremely difficult. We are grateful that the psycologist brought up the homebound suggestion. Since then, the school has been more than helpful in decreasing his workload, especially when he's been sick, and modifying his classes to help him get the credits he needs to graduate. They also helped further modify his 504 plan. This has greatly reduced Azer's stress.
on January 12, 2021