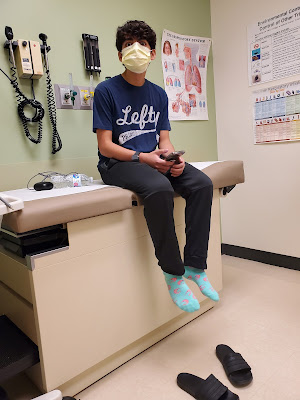 It's been about 4 weeks since Azer's surgery. He has been throwing up pretty much with each meal. The GI team said he should make sure everything he eats is basically moist or wet and that he should try to chew longer and take smaller bites.

He has lost 7 lbs since getting discharged from the hospital. His weight loss is due to him not being able to eat as much as he usually does. He also had a braces adjustment where they are correcting for a cross bite, and the elastics are causing a lot of pain, even weeks later. Azer is already off of one of his stomach motility medications. Today they want him to stop one of the antacids he's been taking for a few years. They said the goal is to stop taking most of his GI medications.

About a week ago, Azer started having an increased cough and was coughing up darker mucus, pretty much all day. After increasing treatments, he started to feel a little better. His PFTs were pretty much at his baseline today, and a little higher than when he got discharged from the hospital. The doctor said his lungs sound pretty clear except for a few crackles. They wonder if most of it is draining from his sinuses and think a visit to see ENT might be helpful. In the meantime, they want him to use an anti-inflammation nasal spray before his nasal rinses.