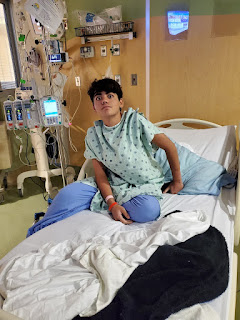 It was very unpredictable when Azer's surgery would happen, as the surgeon also does emergency surgeries, so it wasn't even known what day they would be able to fit him in. They were really trying to push the surgery earlier than later because his lungs got bad so quickly. Luckily, the IV antibiotics worked fast, and his PFT yesterday looked pretty good, and the CF doctor felt confident that Azer's lungs were healthy enough for surgery.
Azer is glad he has a PICC line in for this surgery, as last surgery he only had IVs, which can fail often. Unfortunately, the PICC team told him that his vein could only handle 2-3 more PICCS before he would need a port. Hopefully this surgery is the key to keeping him healthy for the rest of the year!
on October 13, 2020