The doctors wanted to start Azer back on Hypertonic saline. They saw some plugging in his lungs on the CT scan, and wanted to try to work on clearing it out. They started him slow on 3% hyper-sal and then tried the 7%. He is doing well with it. Luckily this time it's not causing him a major coughing fit. He is continuing to do the IPV three times a day.

They added a possibility of a sensitivity of tegaderm to his medical file, because of sudden itching he had to it. They also added his reaction to the Levoquin. His right wrist has improved, but his left still hurts pretty bad. Ibuprofen and heating packs have helped, but the doctor has mentioned she might make him wear a wrist brace. PT has been great with working around his wrist pain, and keeps him motivated during every session. 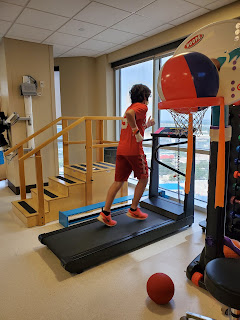 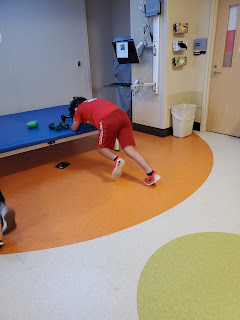 Both of his PFTs last week were exactly the same as today, so there has been virtually no improvement in his lung function, except that he feels like his lungs are clear.
They may start Voriconizol for the rare growth aspergillus.
Thank you to HopeKids for bringing Azer some goodies and crafts!! 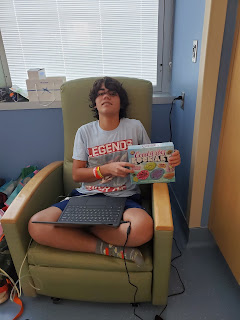