Yesterday, since Azer's lung function was not better, they made the decision to move ahead with the impedance study. It was very uncomfortable for him when they put it in, and for hours after. They did an x-ray to make sure it was in the right place, but they had to adjust it again. It made breathing treatments harder, as coughing made it move around and he could feel it. After he ate something, he said it felt a lot better, but he could still feel it when he swallowed. The device attached to the catheter had buttons on it, and he was instructed to push one when he took medication, another when he ate, and another one if he ever experienced reflux or heartburn. The pH levels were real time, so he was kind of having a bit of fun seeing if what he ate or drank changed the numbers. 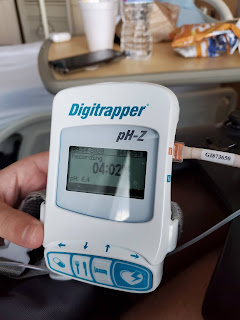 It was in for 24 hours, and they pulled it out this afternoon. The results should be ready tomorrow.
He couldn't do anymore school work yesterday, as it had been a difficult enough experience. School work and even doing fun activities like crafts has been a struggle for him without any ADHD medicine.
We saw Infectious Disease today, who went over what all this could possibly be from their perspective. ID doesn't want to treat the aspergillus, because they said it would guarantee it would cause it to become resistant in a few years, if not sooner. The ID doctor also said that Azer's CF doctor should have done a biopsy during the bronchoscopy to physically check for fungus. The CF doctor came in soon after and said she really wants to treat the aspergillus, and that they don't do biopsyies during CF bronchs.
The downfall of treating for aspergillus is they may have to completely stop the Trikafta for the 6 weeks of treatment with the antifungal. Also, the levels of medication have to stay the same, which usually means weekly lab tests. The last thing is the antifungal medication can cause the liver issues, so they have to monitor that and sometimes have him take Ursodial with the antifungal. ID is very against treating the aspergillus, and says many more tests need to be done before going ahead with the treatment because of all the risks. They said that from the CT scan, at first it looked like it could be either fungus or mucus. After looking at it closer, they said that the areas had improved in some places and gotten worse in some, so it moved around, meaning it was mucus plugging, not fungus which does not move around. The ID doctor said that his blood tests are all negative for any signs of ABPA, and this is likely a big benefit of the Dupixent he's been on for over a year.
The CF doctor also said that this could be his new baseline, but Azer really disagrees with this.
on September 15, 2020