PICC team said that because Azer has had a PICC line over and over in the same area for years, the vein has become scarred and this may be why he has had pain and bleeding at the site last time. He has had minimal pain with it this time. He really tried to move his arm around while it was healing.

Because of the positive virus test, he is on droplet precaution, so he can't go to the playroom or walk around outside the room, but it's been very nice outdoors, so he goes out as much as possible. His favorite outdoor activity is wiggle ball (swinging only with the non-picc line arm of course 😉).

His diarrhea started to come back last night, probably due to the antibiotics. They are backing off of the Miralax twice a day. The GI team came by to work out a plan for getting his appetite back, and want to do a fecal test to make sure there isn't any unusual intestinal bacteria and check for how well he is absorbing fat. They are increasing his Periactin to help his appetite. It seems his ADHD medication may be dampening his appetite during the day, as around bedtime, he gets a little hungry. 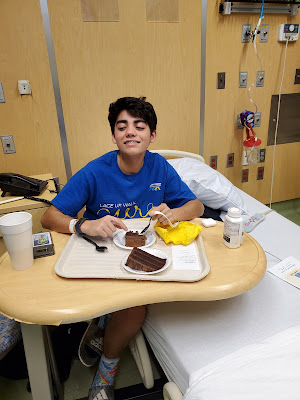 His PFT test yesterday went very well. He is only a little lower than his normal baseline. The doctor wants Azer to stay at least until the end of the week to see if his GI symptoms improve.
on January 07, 2020