So, Azer's viral panel came back positive for the Coronavirus, which is basically one of thousands of cold causing viruses. His bacterial culture came back with only sensitive staph. The ENT clinic gave him some antibiotic ointment that he is to put in his nasal rinse everyday to help.

Today, he felt like his lungs just weren't recovering from this virus, so he contacted the CF clinic. The antibiotic that would cover everything he cultured from December would be Levoquin, but he doesn't want to deal with ongoing reflux from having to stop the Erythromycin. The doctor prescribed another antibiotic that will hopefully work.

On top of battling this virus, and the bacteria in his lungs for the past week, Azer has had baseball tryouts for his High School freshman team. He has been working hard to get his treatments done, his PT stretches, lifting weights, sterilize his nebulizers, and try to maintain his weight. He felt like there was no way he would make the team.

It was an emotional day when the coaches sat down with him and told him he has been selected to be one of the pitchers! Azer said he almost teared up when they told him he is inspiring and they want to keep him around. He keeps saying this whole team and the facility is like a dream come true. Anyone that knows Azer, knows he lives and breathes baseball. He has worked so hard to maintain his lung health and to keep his body strong, and it has paid off. He is so excited to spend nearly everyday on the field. 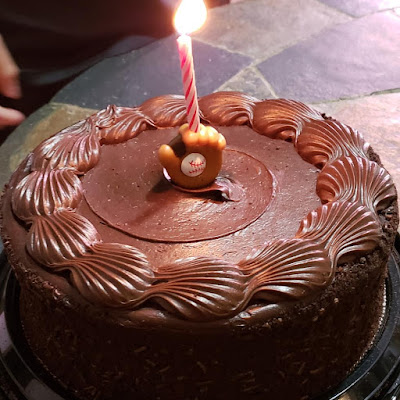 It is going to take some planning and adjustment to schedules to get his treatments done and when he has late weekend games, but we are looking into a battery powered nebulizer. He has noticed he can't eat a big meal before practices, but is starving after, so it will take some practice to figure out when and how much he can eat. Azer isn't too worried about all this however. The main thing he is anxious about his that he required to get a haircut!!!

When we had Azer's 504 meeting for High School this year, it was pretty much the same things it has been in the past: allowance for hydration and snacks, unlimited bathroom breaks, free pass to the nurses office... This year Azer attended the meeting and was able to bring up other issues that arose. We received some 504 suggestions from another family with an older child with CF that Azer really liked. We also addressed the possibility of him being hospitalized during baseball season, and wanted assurance that he wouldn't be penalized from missing practices or games do to doctor visits, or being ill. Azer is really taking charge of being an advocate for himself!