Yesterday evening, Azer's IV really started to bother him. It flushed fine, but just running fluids through was causing pain. The doctor said as long as he drinks plenty of fluids, they could take it out and not replace it.

The most painful part of the removal is the tape. The nurse was very patient and let Azer remove it slowly himself a little at a time. 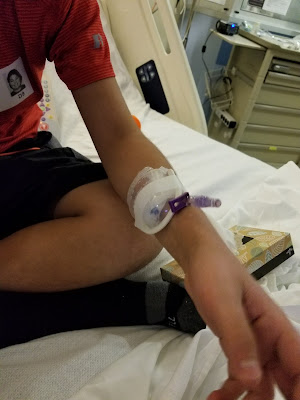 He hadn't drank much all day, so a resident doctor came in and essentially threatened Azer that if he didn't drink enough Gatorade, he wouldn't be discharged. It worked, and Azer managed to drink and hold it down. 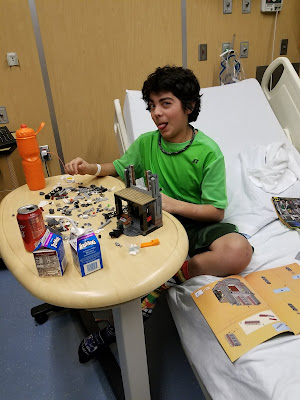 He's had reflux issues since we've been here. It's difficult to keep track of what medications he's taking when they're given on a different schedule than we do at home. This morning I realized he hasn't been taking Erythromycin, which he takes for GI motility. Apparently, it reacts badly with the antibiotic he's taking right now. There is another antibiotic he could take, but he has experienced chronic vomiting with it. So, they are trying to figure out what antibiotic would work for the bacteria he cultures without causing an interaction with his other medications.

CPT has been painful for him, especially the upper loves, and we've only been able to do a few minutes at a time. He's been trying out a different device called PEP which is different than the Aerobika in that instead of using positive and negative airway vibrations, it only uses positive pressure to open the airways. It has been helping bring up a lot of mucus. Unfortunately, last night, his mucus had some bloody streaking in it, so we are keeping an eye on that.

The doctor ordered an X-ray to see how his lungs look. She said if we did a PFT, it would be kind of pointless because we know it would be abnormal between his refluxing and congestion. After she looks at the X-ray and figures out his medications, we might be able to be discharged today!