Yesterday, they were able to start Azer's IV easily. His electrolyte panel turned out to be normal when he was admitted, despite how little he has been drinking. He has had hydration fluids running all night long. He was able to eat some dinner before his night feed was started. They also started an IV antibiotic to help his lungs out.

Azer's night was rough. Around 7pm, his fever and headache came back. His head hurt so bad it was difficult for him to cough all the mucus out during his breathing treatment. They had to get in another breathing treatment for the day, which unfortunately ended up being around 1:30am. His fever spiked again around 4am, and had to stop his night feed just a little early due to nausea. He has been holding down his formula despite having reflux this morning. 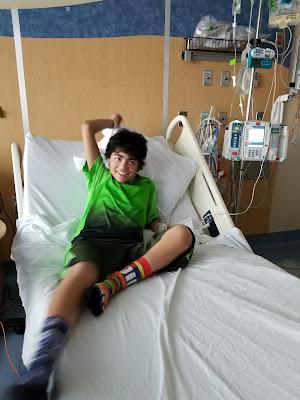 The doctor is happy with how Azer presents this morning. The decision of when to go home has been left up to us. The doctor agreed it can be scary to deal with these fever spikes at home while worrying whether he's hydrated enough or not. We have opted to stay a few days to make sure he's getting better before going home on oral antibiotics.