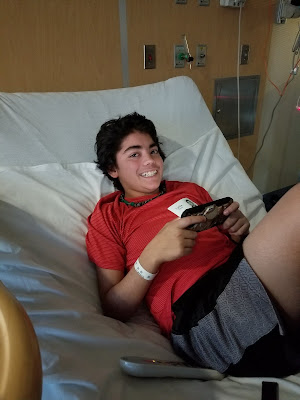 This morning, I emailed the CF clinic out of concern. Azer still had a fever, and it wasn't going down with ibuprofen or Tylenol. His headache was very painful, and he was also experiencing vomiting and diarrhea. He was having a hard time keeping hydrated. Our CF doctor recommended admitting him.

A few hours later, around the time when the bed was ready, his fever finally broke and he was feeling a lot better. He still wasn't drinking much, but was holding down his formula and his headache was gone. I asked the CF clinic if it was still necessary to admit him. The CF doctor still wanted him admitted, especially since he's had the flu back to back now. His cough is also sounding pretty wet.

They are starting IV fluids to get him well hydrayed. Hopefully this will be a quick hospital stay!
on January 08, 2018