Yesterday we had a follow up appointment with the ENT doctor. They made in sniff up some lidocaine solution again (he says it tastes horrible), and waited a few minutes before taking us to the procedure room. 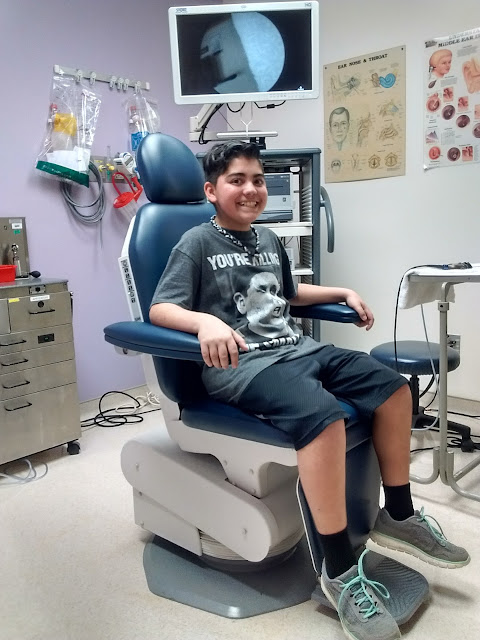 This time the procedure was a little more painful than last time. The insides of his sinuses were very inflamed, red and bumpy, and much narrower than they were a few weeks ago. The doctor even saw what he called a polypoid, meaning that Azer could already be forming polyps. We expected this to happen, but perhaps not so soon. Azer has also been having a decreased sense of smell again, which the doctor said is likely from all this inflammation.

Because Azer had some infected looking mucus in his sinuses, the doctor prescribed an antibiotic for the next two weeks. For the inflammation, he prescribed Pulmicort, which is an inhaled steroid. The Pulmicort I picked up from the pharmacy is a liquid usually put into nebulizer cups. Instead of using it in a nebulizer, we are to put a drop in each nostril twice a day. This is to be done while he's lying on his back so it doesn't just drip down into his throat. We can also stop the Flonase for now, but are to continue with the sinus rinses. Our medication routines are always changing!