The first week was definitely challenging. CPT was difficult, as every 30 seconds or so, he had to sit up and cough out more blood and mucus. Just coughing in general hurt his nose and face quite a bit. He was constantly oozing blood for the first three days. Even though we were assured this was a normal consequence of the surgery, it still is concerning to see your child coughing up blood.

He wasn't eating very much, and it seemed he lost enough weight to cause his G-button to start leaking, so we upped the formula. After the Prednisone really got in his system, he started to become very hungry and ate.

Doing the nasal rinses were really hard the first week. He could only do a little bit at a time and the only way to finish the bottle of nasal rinse in a day was to do a little every few hours. But as the week went on, the swelling began to subside and he was able to do an entire bottle at a time. The best time for him to do it is in the shower. The hot water seemed to loosen the scabs enough for them to come out on their own.

I think we were all very grateful he was on antibiotics for the week, as all that blood was in his lungs, and it took almost a whole week of consistent treatments and hand CPT to get it out. After a week, he started to sound very clear. We had great weather around Christmas break, and so he spent a lot of time outdoors being super active. That also helped clear his lungs, and as a result, we could start backing off on the treatments.

As for the main reason for the surgery, his sense of smell which has been MIA for most of the year has come back! He has been enjoying food much more and it has definitely improved his quality of life. 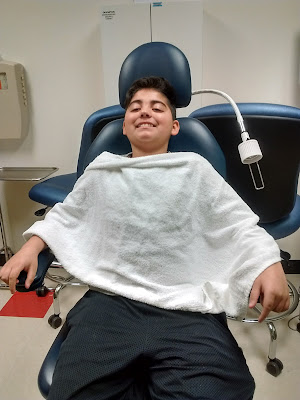 Yesterday was the follow up visit. Thankfully, ENT noticed on his notes he had CF, so we were taken back to a room quickly. First the doctor removed the stitch. Apparently there was only one and it was on the left side. This didn't hurt at all. When he pulled the splints out, this was a little more painful, as his nose is still tender to the touch. Azer could immediately breath better.

The assistant then brought in a syringe with a nasal attachment at the end. She said it had numbing medicine in it. Azer had to stiff the medicine up each nostril. He said it tasted horrible, like hand sanitizer. She let him sip some apple juice periodically to help with the taste. They left for a few minutes to allow the medicine to take effect. 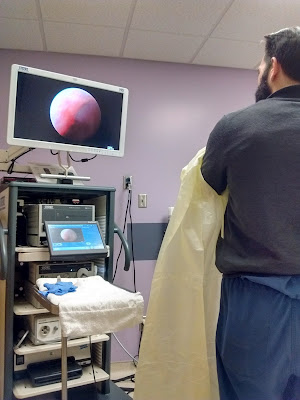 We were then taken to a different procedure room, which had a machine set up with a scope, suction, and camera. The doctor carefully fed the camera up each nostril and pulled out a large amount of scabs. This was painful mainly when the doctor had to push on the septum area, and also when the scabs were pulled loose. The doctor was pleased with how it looked, but said there was still a lot of inflammation, and wants to see us back in a few weeks for another round of suction. 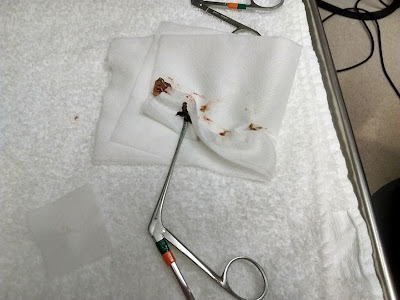 This appointment ended up being in the late afternoon. We had had a bit of snow flurries which ended up sticking to some of the roadways. The roads out of Dallas didn't seem to be treated at all, and it took about 2 and a half hours to get home!
on January 07, 2017