Well, Azer has had a few surprises since he's been home. The mom of one of his friends had some connections with the Rangers. The day after he got home from the hospital, she brought over his very own official photo, autographed by Ian Kinsler. Azer was especially surprised to hear that someone had told Ian Kinsler about him. Azer was beaming from ear to ear thinking about how the Rangers knew about him.

And yesterday, Azer got his other love fulfilled. Cars. A very nice friend of his Kindergarten teacher owns a Corvette. He let Azer and Reema ride in it, and even let them steer. Azer was thrilled, and is still talking about it. 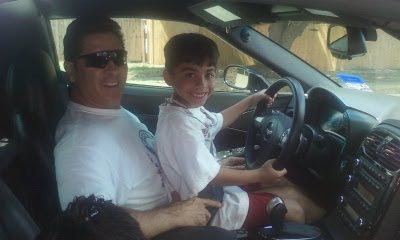 We are also happy to report that Azer is eating food, and seems to be hungrier, especially in the evenings. This is a BIG change, seeing as before G-tube he was rarely hungry at all.

Feedings are still going well. I started him out slow on the new enzymes, Zenpep again. He is supposed to be taking 3 with meals, but I started out on one enzyme with meals instead. The next day I did one and a half, and today I have done 2. He has had no vomiting or retching so far. Depending on what his stools look like, I might just stick with two for now.
on June 14, 2010