The day before yesterday was one of those perfect summer days. We went to the park in the morning and played catch for 2 hours underneath tall, green, leafy trees. Looked at bugs, chased squirrels, played in the dirt.
Then, we went home and swam in the pool for about an hour. This was the first time Azer was getting his G-button under the water. He took it slow as he wasn't sure what it would feel like, but after he realized it wouldn't hurt putting his stomach under the water, he was jumping and splashing and swimming. He threw a tennis ball back and forth with me for almost the entire time.
THEN ... they still weren't tired, so we rode bikes in 100 degree weather for about another hour. No signs of exhaustion whatsoever.

Yesterday, I took them to a local water park. It has a few water slides, one of them is completely dark inside, like a long, black, tunnel. Well, we had no trouble with the G-button on those either. A couple kids asked Azer what it was, and he just said, "It's a feeding tube, cuz I don't eat enough food to gain weight." We were there nearly the whole day, and when the park finally closed, the kids were all ... "Awwwww, why are they closing it?".
I've been noticing Azer has had more "muscle" in what he does. It's hard to put my finger on what has changed, but it's something besides weight gain, which is what he was getting from the Scandishakes. Maybe it's the extra protein. I'm not sure. He seems to have just pure strength lately.

And, I just think it sounds weird, I never thought I would ever say something like this but ... gosh, his mic-key button looks so nice! It's a bit sore for him when we clean around it and turn it, but otherwise, he doesn't even remember it's there. 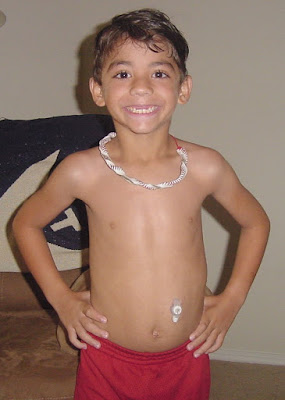