Today Azer had a bone density test to test for osteoporosis that can affect people with CF. We'll find out the results later this week.
Azer has been working hard and taking a lot of shifts at work, sometimes working up to 40 hours a week. His pulmonologist is a little concerned about how many hours he's working as at times he's too tired to wake up on time and do his complete treatment. He is still working on trying to adjust his schedule and work out a routine to help remember his medications, and give himself enough time to do his breathing treatments.
Azer has been been more vigilant about doing his overnight feeds, and gained several more pounds from last week. His lung function fell a little more from last time, but the doctor is going to continue him on Tobramycin instead of doing a month on and a month off. They did another virus test just in case, but it seems most of his coughing is coming from drainage. Two weeks ago, he did test positive for rhinovirus, and viruses are starting to pick up as more people are passing them around now.
Since he's been working so much, he has been saving up money to pay for car insurance. He passed his driver's license test and is finally a licenced independent driver! He has been enjoying his freedom and has spent a lot of time fishing on his days off! 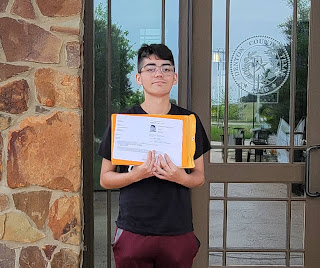