Staying Through the Weekend 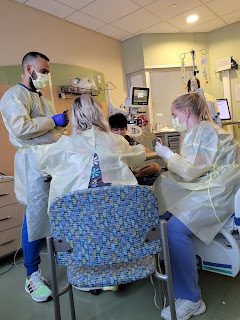 The inpatient doctors and the ID doctors were ready to send Azer home Thursday or Friday. The ID doctors had a few options other than to put in a port. They said they could send him home with the same oral antibiotic combined with inhaled Tobramycin, or with a different oral antibiotic, Minocycline. The problem with the Minocycline is it will take two weeks to find out of his type of staph is susceptible to it.
Azer made the decision with his pulmonologist to stay through the weekend, and aim for discharge on Tuesday which will give him a full two weeks of IV treatment. He may need to stay a little bit longer past Tuesday, as they are working on insurance coverage of the Tobi. He would rather have the Tobi Podhaler instead, as it is much quicker, but it is unlikely to get the insurance to cover it. The regular inhaled Tobramycin takes 30-45 minutes via nebulizer, which he will have to do twice a day, but the added benefit is that he would be able to inhale it with a mask to target some of his sinuses where he is culturing abundent staph.
The hospital staff and his pulmonologist noted that he seems much more like himself now that he's on the antidepressant. Azer has been enjoying Uno games with the nurses. Several will come in at a time and play. They have been keeping score on the whiteboard in the room through the two weeks, and the list is quite long now!
on May 08, 2021