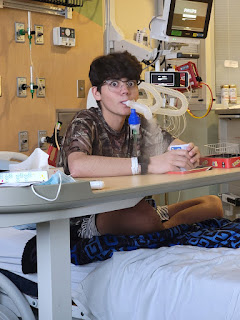 So, Thursday, Azer's PFT was about 20 points higher than it was the day he got admitted. Today, he blew the best he has in two years. He cultuted MSSA again. This is all great news, but he has been getting annoyed with the doctors as they asked to send him home on IVs, but they haven't come up with an explanation as to why this is happening over and over again, since last year. Azer is supposed to see the Infectious Disease doctors tomorrow.
We have been noticing since last year that Azer has become increasingly irritable, and he stated that he would begin to feel numb when he was in the hospital. His psychiatrist said that adolescents, especially males, tend to exhibit depression in anger. His pulmonologist mentioned that there have been some possible cases of Trikafta making people irritable, but this isn't certain. Azer spoke with his psychiatrist who told him he would benefit from an antidepressant added to his ADHD treatment. It will take time for it to start working, but this is a good reminder that May is Mental Health Awareness month, and that CF affects families and patients in many unseen ways.
Thank you to all who have donated to the walk, GrubHub gift cards, snacks, and games!!!
on May 03, 2021