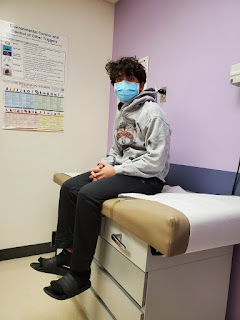 Since his last clinic visit, his lungs kind of stayed the same, but over the last few days, they have grown much worse. They are admitting him again today. This is the 6th time this year, and they still don't have a definitive answer for this. The doctor brought up the possibility of getting a port in the near future, and possibly needing IV antibiotics every other month. This is discouraging to think of this, as it could really change his ability to play baseball.
He has had quite a bit of stomach pain over the last few weeks. He tries to vent his stomach, but nothing comes out. He had an incident where he had extreme stomach pain and threw up just water. He lost more weight since he was last admitted. I think he's down almost 10 lbs since he got discharged from the last hospitalization. They may try a special kind of G-tube bag while he's admitted to help the air vent out. Since he's been still having stomach pain and trouble swallowing some foods, the dietician would prefer him to continue a mechanical soft diet.
Azer also saw his endocrinologist today. She ordered some lab draws and x-rays, including a bone age scan, since it's been about a year since those were done. These are to check to see how much time he has left to grow, and how long he could continue to take his growth hormone shots. They also check to make sure he hasn't developed diabetes, as growth hormones can potentially cause this.
He also had a chest x-ray done, and then he is going home to pack for yet another hospital stay. This is hard with it being December...
on December 02, 2020