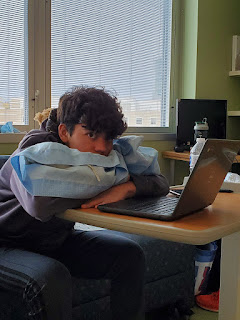 Azer is very ready to go home, and has been cleared by the surgeon to go home. The GI doctor would like him to stay until Monday. Their reason is by Monday, his IV antibiotic course would be complete, and he would be able to do another PFT test. His PFT from yesterday was worse than when he came in, which is to be expected. They did an X-ray earlier in the week, which showed that he still had some gas in his abdomen, so it still hurts to take a deep breath.
They have been slowly increasing the rate of his G-tube feeds, and by Monday he should be at the rate they have been aiming for. They want to make sure that he is tolerating the speed and amount of formula. They are also taking away one of his GI medications now that Azer cannot reflux.
Azer felt like he might have been refluxing, but he later realized that the burning feeling isn't going up to his esophogus, that it is staying lower. He said the new medication that coats his esophogus doesn't help the burning, but that tums does help. This is great news, as it shows that the Nissen is working.
More good news is that Azer hasn't needed any pain medication for the last few days, even though he has been increasing his activity during PT.
on October 23, 2020