Today we met with the surgeon regarding Azer's reflux surgery, called a Nissen Fundoplication. Since medication has failed to control his reflux and aspiration, surgery is the only other option. The surgeon answered a lot of the questions we had about the operation, recovery and life after.  He said he will be doing a bronchoscopy at the time of the surgery to check for any rare birth defects in the esophagus. Apparently, there are two rare defects can happen, one around the voice box area, and another between the bronchial tubes and the esophagus, that could allow reflux to enter the lungs. There is a possibility of Azer getting a new G-tube stoma if the surgeon has a hard time operating through the existing hole. Azer may have a hard time eating and drinking for a few weeks after the surgery, but he will be able to get plenty of nourishment through his G-tube while he is recovering. He might have to be admitted before the surgery if the CF team feels like he needs IV antibiotics for his lungs. 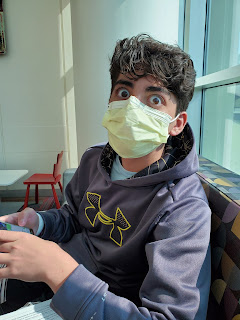 It's been just over a week since Azer got off IV antibiotics. He already has been coughing up darker mucus, has been experiencing fatigue and chills. He messaged the clinic who wants to start him on inhaled antibiotics to hold him over until the surgery. They said if the antibiotic are helping him feel better, he can stop taking the antifungal, since it's obvious that it isn't helping his lungs at this point.
on October 01, 2020