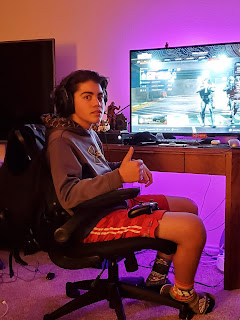 Today was a day of a lot of uncertainty. It was doubtful he'd come home today, as they were still waiting for his Voriconizol levels to come in. They came in late this afternoon. The levels are too low, so they are increasing the dosage orally.

A lot of the decision to discharge also rested on how his lung function looked. His PFTs today were 6 points higher than last week, so that was the big improvement we were all hoping to see. His oxygen has still been lower than normal at times.
Azer's psychiatrist worked with the doctors to try to find another non-stimulant medication that wouldn't interact with the antibiotics or antifungal he's taking. They agreed upon one, with the only possible interaction being a rare effect on heart rhythm. The risk is very low, but they did an EKG prior to make sure his heart beat looked normal. They checked it again before increasing the dosage, but so far he feels like it's beginning to work.
The Voriconizol has still been messing with his vision, particularly his perception of colors, but it has been infrequent luckily. He has had no other side effects thankfully. The main downside is he can only take Trikafta twice a week while on the Voriconizol.
The impending study also came back late this afternoon. It shows that he is refluxing and that he is at risk for aspirating. Unfortunately, the medication they'd like to put him on has a conflict with his ADHD medication and his antifungal. He will have an appointment with his GI doctor to discuss this further.
Azer has been gaining weight well, even though he hasn't been very hungry at all. He thinks it's partly due to how hard he's been working in PT, and that he's been putting on muscle.
After three weeks of being in the hospital, he is so happy to be home, ready to put this hospitalization behind him, and baseball ahead!
on September 21, 2020