Allergies or Something Else? 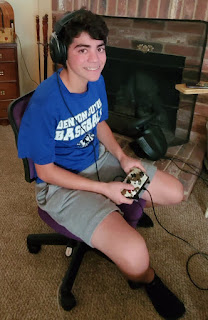 About three weeks ago Azer started to develop a dry cough that got more frequent and had severe coughing atracks. He felt like it started from allergies, but had a day where he felt like he had a sore throat. He contacted the CF clinic by email, and they recommended increasing treatments and to let them know if anything changes. The doctor was surprised that he would have much of a reaction to allergies, because of his allergy shots, and all the other steroids and allergy medications he's on. Azer also stopped Pulmozyme as he felt like it was irritating his lungs.

About a week ago, he developed a fever, and was very tired. He also started to cough up dark mucus, his lungs felt full and he felt like he had shortness of breath all the time. He was able to video chat with the clinic. He weighed himself, checked blood pressure and his temperature at home so they could put it into the system. I told the doctor what I heard through the stethoscope, and she asked him to exhale to see if she could hear any wheezing.

Azer told the doctor he really felt like steroids would help, as most of what he was feeling was lung irritation. She felt like most of his symptoms pointed to a sinus infection. She prescribed Prednisone and an oral antibiotic. Azer asked if he should start ceftazidime, as this usually clears up any lung infection. The doctor looked at his past cultures, and he hadn't cultured Steno since September, and Ceftaz mostly treats this. She told Azer that he could start Ceftaz if the steroids and antibiotics don't work.

Azer finished the Prednisone, the day after the course finished, he felt his cough coming back. It never really went away completely on the Prednisone. He contacted the clinic again and asked if he could try an inhaled steroid via nebulizer. The doctor said he could, but he'd have to stop doing his other inhaled steroids.

So far, Azer feels like it is helping. His coughing has lessoned considerably, and he hasn't had a fever in over a week. We still don't really know what caused this. It likely was not caused by a virus, as typically steroids can make viruses worse, but his symptoms are definitely similar to a mild case of COVID-19. We are already keeping very isolated, and will definitely continue just in case because we don't really know what this is.
on April 30, 2020