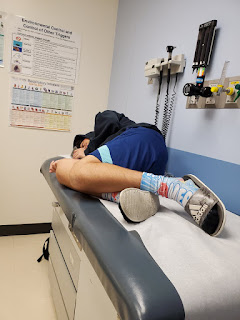 The week started well, with Azer feeling more energetic but still coughing a lot and zero appetite. Some days, he only had G-tube formula and milk. As the week progressed, his cough became worse, to the point where every time he coughed he would have a coughing fit.

The diarrhea continued until Thursday, when it seemed to finally end. Thursday, he had a low grade fever, and felt much worse, so he contacted the CF clinic. They made an appointment for him Friday.

He was miserable when we arrived. He said his lungs felt uncomfortable, and he had to breathe shallow just to keep from constantly coughing.

At clinic, they confirmed his rapid weight loss. The dietician recommended that if he just can't eat anything, his weight loss will continue. She prescribed an extra can of formula during the day, which would make it 6 cans a day, and should meet his daily caloric intake.

His heart rate was elevated, and he had a low grade fever. His first PFT test was about 30 points lower than his baseline. After an Albuterol treatment, it was slightly higher. It was very difficult for him to complete the PFT test, as he could barely make a complete exhale without coughing. Both the doctor and Azer felt like he never fully recovered from his lung infection that began before he started Trikafta. Two weeks of antibiotics and steroids hadn't touched it, and we were waiting to see if the Trikafta would clear it up, which did not happen.

The doctor said his lungs sounded fairly clear. She said his symptoms and color of mucus really pointed to the possibility of a virus that could be making a lung infection even worse. Azer decided it's best to be admitted for IV antibiotics, to clear up his lungs and also to judge if any of his symptoms are being caused by the Trikafta. The floor was very full, so they sent us home to wait for a bed to be available.

Hopefully they get him feeling better quick he's not in the hospital too long!
on January 03, 2020