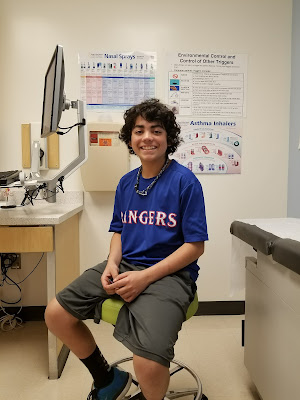 Today, Azer weighed about the same as last time. It's hard to tell on the growth chart, but we believe he grew some. Because his height is measured at Endocrinology, ENT, and the CF Clinic, and entered into the same growth chart, there are small differences between the measurements at the different clinics (as in, it appears he shrinks lol). But compared to his last CF clinic visit, he has grown a little. One noticeable difference (much to our PT's delight) is that he definitely putting on muscle because of the growth hormones. Another wonderful side effect of the growth hormones (and probably because of puberty as well) is that he has been truly hungry and eating full meals.

One concerning symptom he has had for the past few weeks is hip pain that seems to be worsening. The PT gave him a few stretches that might help, but when she looked and felt him over today, she was concerned the pain was not muscular, that it was in the joint. Hip pain is one side effect that we were told to watch for with growth hormones. We were sent to do a pelvic X-ray to see what is going on. 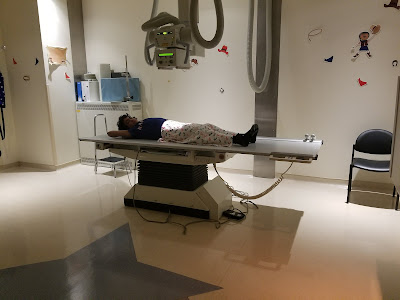 He also did a chest X-ray to see if that portion of lung that was plugged and collapsed has recovered. 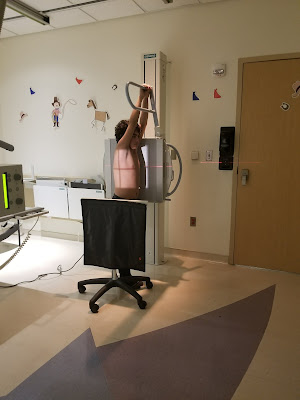 His PFT was fantastic today, likely because he is on Qvar as well as Dulera. The doctor said it's fine short term, but long term being on two inhaled steroids can inhibit growth, and can also affect adrenal glands. So, when he feels bad, she said he can do Qvar for three days at a time.

The doctor also felt like when he had all that chest pain after the flu, that it might have been pleurisy, which she said has been very common with the flu this year. After recounting all the things to the doctor that happened after Azer got the flu has been remarkable.

He was put on an antibiotic that forced him to stop one of his GI motility medications.
This caused him to reflux and vomit, and made it harder to eat and stay hydrated.
They switched his antibiotic to one that would allow the GI medication.
He ended up with severe diarrhea, which forced us to do home-bound education.
He was put on a medication for intestinal overgrowth.
All the congestion in his lungs caused inflammation to the point of pain.
An area of his lungs ended up plugged and partially collapsing.
He was put on steroids, both inhaled and orally.
He coughed up bloody mucus, and had to stop an Hyper-Sal which made him feel congested.
A week later, he experienced chest pain either caused by inflammation of the cartilage of the chest wall, or the lining of the lungs.
A week of ibuprofen, and everything was back to normal!

The flu is something no one wants, and having it twice on top of having CF is potentially deadly. This is just a friendly reminder that if you are ill, please stay home. Get the flu shot if you can. You could save someone's life.