ENT and Going Back to School

Azer says his lungs are feeling a lot better, so we backed off of the extra Qvar (additional inhaled steriod). After three days on the ibuprofen for the costochondritis, he said the pain left the lower area of his rib cage, got a little better at the top, but didn't go away completely. He let the doctor know, and she said he could restart the ibuprofen and continue it as long as it doesn't bother this stomach. The pain during CPT is gone now, thankfully.

Since he's been out of school three weeks, this week being his fourth, he is very ready to get back to school. After speaking to his homebound teacher and our social worker, we found out he isn't necessarily required to finish out the 4 weeks of homebound instruction if the doctor feels he is ready to return to school. The paperwork was completed in only a few hours, and he will return to school this week! He is excited, because this means he can also participate in baseball, as practice starts in just a few weeks. He has been feeling well enough to practice nearly everyday on his own. 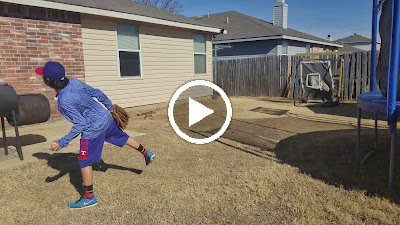 As I said in a previous blog post, two weeks ago, Azer finished a short course of Prednisone after which he regained his sense of smell. We told this to the ENT doctor today. She said that this is common as the steriod causes the polyps and swelling to go down. I asked how long we could put off surgery with the steroids. Obviously there are numerous side effects from being on steroids constantly. She wouldn't recommend it more than a few times a year. She said in the mean time, while the swelling is down, that he should go back to doing nasal rinses once or twice a day to keep the mucus clear. She said he can help keep his olfactory nerve active by smelling strong smells twice a day, such as coffee or oregano, and to change up the smell every 4 weeks. He's already been doing this on his own, enjoying smelling many things he's missed out on. It's pretty remarkable how he comments on how things smell, as if he's never smelled certain things before. Having a sense of smell isn't necessary to live, but losing it does diminish quality of life, and it's fun watching him enjoy smelling and eating!
on January 30, 2018