We've had this appointment scheduled for a while, so there wasn't much that the doctor could do or tell us after only being on Growth Hormones for a few days. 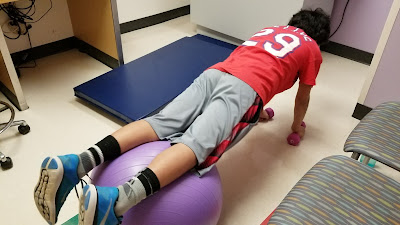 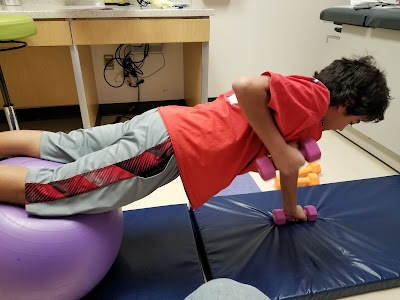 While we were waiting to see the doctor, our Physical Therapist brought in some exercise mats and weights so Azer could do exercises while we waited (she didn't want him to get bored, haha!) 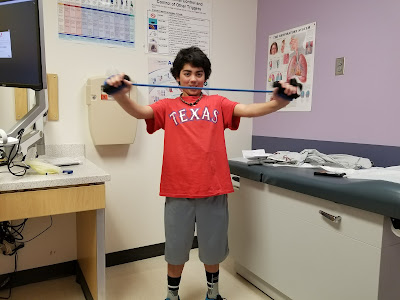 He was thrilled....  not really. The good news is his scapulars are starting to come together again, and his form is improving (again). We really have to stay on top of this now that he's on GH.

While we didn't go over much with the doctor, she did answer some questions both Azer and I had. He has to have his Scoliosis checked every 4 months, to make sure it isn't progressing. The doctor mentioned this is especially important given that he has CF. Scoliosis can impair the ability to breath in some cases.

If, after he is done growing, he is tested and still shows to be GH deficient, he might need to be on a low dosage of GH for the rest of his life, as studies have shown GH to be necessary for cardiovascular health, among other things.

I asked about the results of his MRI, showing that his Pituitary Gland was small. The doctor said other than having a traumatic head injury (he hasn't that I know of) the only other reason why it might be like this was he was born that way. She doesn't know why he's been GH sufficient up until puberty started. GH are most effective when started as early as possible, as when puberty starts, the window starts closing. But, she mentioned he should have a few years left to grow.

Azer asked her about the possibility of developing CFRD (Cystic Fibrosis Related Diabetes). She said that even in people without CF who are borderline diabetics, when taking GH, it often does push them into having full blown diabetes. She said that if he does develop CFRD, it's our choice to continue with GH along with insulin or not. Sometimes, when stopping GH, diabetes can go away, or sometimes it's there for life. Even without GH, he has a 60% chance of developing CFRD in his lifetime. The doctor said we would keep a closer eye on his blood sugar than before. So, we shall see!