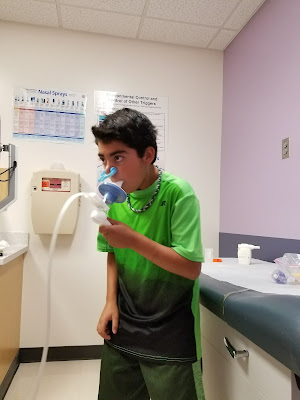 Thursday was another normal CF Clinic day. Azer blew about 5% lower than he did when he was discharged from the hospital in September. Ever since we had a cold front, his cough has increased as well as mucus production. About a week ago, his shoulder pain returned, but it only lasted about a day. The doctor didn't feel like it was time for antibiotics yet. She said we should restart his Nasonex to help his allergies out a little bit more.

His weight was exactly the same as well as his height. He hasn't grown in height for the majority of the year. The results of his Growth Hormone Test showed that his hormones for growth are too low to allow his body to grow. Azer wants to pursue the Growth Hormones, so we will be started them soon, despite the increased risk of CF related diabetes. We talked with the dietitian and GI doctor about the risk, and all people with CF have a 60% of getting CFRD at some point.

They retested his potassium as well as the rest of his electrolyte panel and it showed everything is right where it should be. The dietitian assured us that worrying about his potassium should be on the lower end of things to obsess over. So, as long as he does his night feeds, it should stay stable.
on October 14, 2017