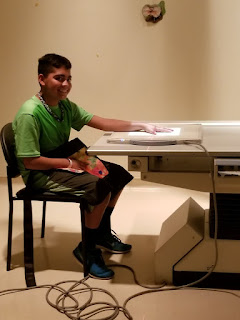 Last year, we saw another endocrinologist and after her evaluation and blood tests, determined that he was just beginning puberty, and that because his nutrition was so good, that he would begin to grow in height soon. Friday, we saw the endocrinologist that works closely with the CF clinic. She noted that Azer is well into puberty, we have maintaned good nutrition, and yet he has not grown in height at all since his last CF appointment in April. Around eight years ago, his height was around the 25th percentile, which is likely genetically where he's supposed to be. But, for the past few years he's been platueing around the 10th percentile and it has not improved.
She sent us down for a repeat of a bone age scan. Our last one was normal as was this one.
When he was last tested for growth hormones, the levels were good. She said that they can fluctuate during the course of a day, so in a few weeks she wants to run another test. Azer will be fasting and will have an IV placed and over the course of about 4 hours, they will test his growth hormones and also inject him with growth hormones and see where his levels are at. If his hormones aren't where they should be, we might be able to start hormone replacement therapy. If they're fine, I'm not sure what else can be done.
One concern of starting hormone therapy is it can cause CFRD (CF related diabetes). If someone is borderline with high blood sugars, it can push them over the edge and cause CFRD. Sometimes, when the therapy is stopped, their blood sugars go back down to normal, but sometimes, they end up with CFRD for life. Over the past few years, they've been watching Azer's blood sugar closely, as they've been high, but never seem to get super high from the OGTT. But this is a concern to keep in mind.
on August 27, 2017