Last week, Azer seemed to have come down with a virus that only seemed to last for a few days. The virus brought nasal drainage, so that on top of any allergies he has right now has caused all that mucus to end up in his chest. On Friday, he really seemed to be having trouble breathing through it all. We increased breathing treatments, and did manual CPT about 5 times a day.

His PFT's were 86% FEV1, which is lower than his usual baseline. We were expecting it to be lower the way he sounded. When the doctor listened to him, he had some wheezing that moved around, and some noisy spots on his lungs. We all agreed that a course of oral antibiotics would help a lot right now. Luckily he only cultured sensitive staph again.

We had a new member of our CF team come visit us. Our clinic now has a Physical Therapist. She said she loves working with the CF team, and thought it was kind of interesting that most of what she sees in the CF clinic is sports injuries. Although that's not necessarily a good thing, it means that the majority of our CF kiddos are very active and athletic.

Even though Azer is already very active, she did measurements on him in various places. She noted that his posture is incorrect, and is likely due to all the years of coughing and also having a G-tube. She came back a few times during our clinic visit. She had him do some movements after his PFT's, and then later on, she took him out into the hallway to try out some stretches. There was a lot more to it than I ever thought there could be. She hopes that in three months, his form will get better. After his form has improved, she hopes to have him start weight bearing exercises. She expects that this will help his pitching form, his Osgood-Schlatter's knee, and his scoliosis. There is also evidence that doing the proper PT could reverse low bone density.

Azer lost a few pounds, which put him down closer to 50th percentile for weight, which is a bit more normal. He also grew nearly an inch since his last clinic visit. The doctor is hopeful that his body will catch up in height now that his nutrition is more than sufficient though puberty. 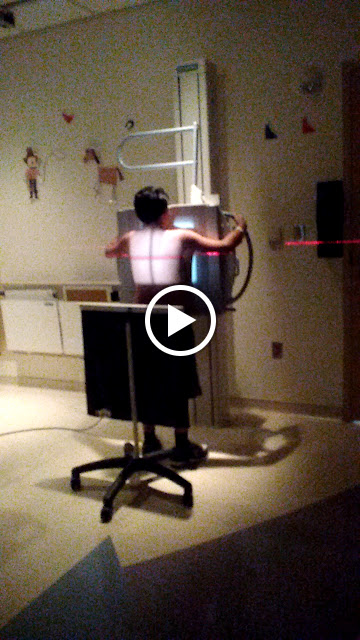 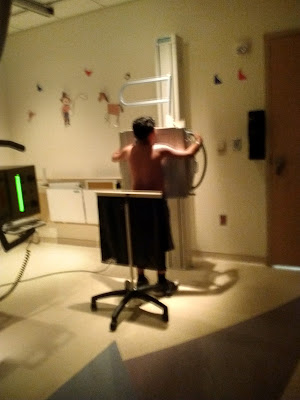 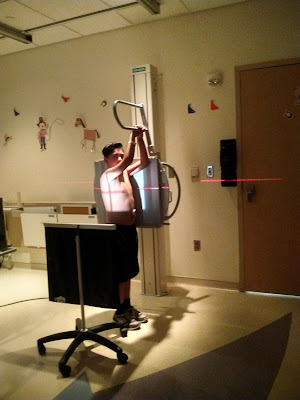 After clinic we had chest X-rays just to see how everything looks. Overall, everyone thought he looked and sounded great, and is very happy with all the work we put in at home.