A Pre-op nurse called yesterday and let us know when and where to register and check in. We put in plenty of extra breathing treatments to prepare for the surgery. They also let us know they might be admitting him and keeping him overnight after the surgery.

As soon as we arrived at the Surgery Clinic, they put us in a room right away. The team was very upbeat, and kept the joke running about Azer getting a brain transplant. He was given lidocane using a  J-tip  before they put his IV in. A little while later, they gave him Versed through his IV, and he got very relaxed and giggly. The doctor said to expect the surgery to last about 2-3 hours. (I was surprised it was so long)

About an hour into the surgery, we were called into a Consultation room with the doctor. 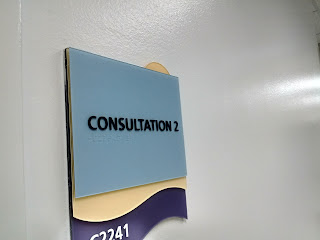 He apologized and said not to worry. He had already cleared some sinus cavities on one side, but was having great difficulty accessing the left side. Like many people, Azer has a deviated septum. However, in Azer's case, the inflammation, mucus, and polyps had further pushed the septum so far, that he probably hasn't been able to breath from that side for a long time. The doctor needed our signature and permission to continue with the surgery and to cut and file down the septum. The doctor put rubber splints into each nostril and secured them with a stitch.

The surgery was indeed close to three hours. When it was over, we were able to go be with Azer during his recovery. 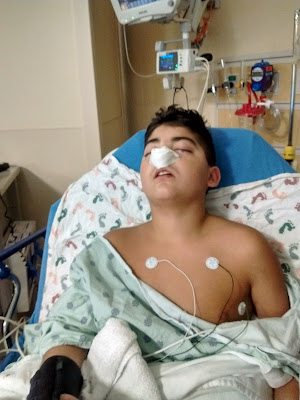 It took about an hour in recovery for him to be released and they let us take him home. They felt like he was breathing well enough to send him home. We were sent home with steroids and precautionary antibiotics. Tomorrow, we will start Neti pot sinus rinses.

His breathing treatment tonight was shorter than usual. Coughing is very painful for him right now. His lungs sound very noisy. It is always shocking at how quickly his lungs and become congested. I tried to do some CPT for him while he did his best with his nebulizer. 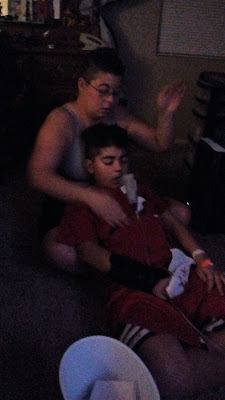 He is coughing up some blood, likely from drainage from his sinuses. When he sits up, he soaks through gauze pretty quickly. Obviously, his face is sore to the touch. Controlling all this bleeding and pain is challenging. Hopefully, this will get better quickly.