Yesterday was the appointment where they did all the annuals: annual bloodwork, X-rays, fasting glucose test, bone density, and a deep review of his care. We were there for about 5 hours. While exhausting, it is necessary.


So, he had been fasting since midnight. It seemed to take quite a while to get into the labs, so we went to X-rays first. After, they did a blood draw for his fasting blood sugar and many other levels, including vitamins. 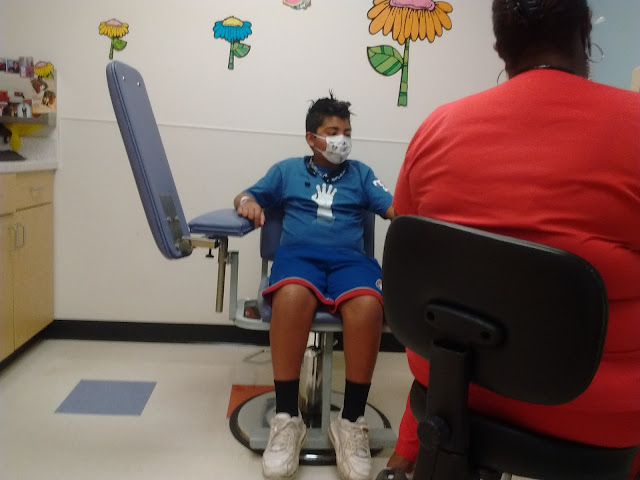 Shortly after we got into our clinic room, he was instructed to drink several cups of the glucose drink.


His weight was 108, which is the same as last time. I told the GI doctor, it has been difficult to withhold the 5th can of formula, but his BMI went down a little, so she's happy with where it is. He grew an inch since February. The GI doctor wanted to know a little more about our Endocrinology visit. She said that the Dr. we saw is on the more conservative side of growth hormones. Our GI doctor said that in about 6 months, if he's still growing slowly, and not catching back up with his genetic goal, we can see another endocrinologist that is starting to take over more of the CF kids.


His G-button has been feeling tight - again! - so a few weeks ago I had to take some water out of the balloon. This is what the balloon looks like. This gave him a little more space between the button and the stomach wall. Since then, it has been feeling better, but the skin around the stoma has been very dry and itchy. They gave us what is essentially diaper rash ointment (zinc ointment) and some special gauze to use to protect his skin when he's swimming. They said perhaps the chlorine in the water is irritating it.

Since he's gained weight, his stools have been more fatty. When people with CF gain weight, they need a stronger dosage of enzymes, so we can increase his enzyme dosage for large meal times to see if his stools improve.


He only blew a 85% on his PFT's. His chest X-ray was improved since last time. Even though his X-ray looks good to the Drs, it still makes me sad to read the radiologists report: that there is wall thickening and bronchiectasis permanently in his lungs. It seems that lately, there is plugging in the same places that just doesn't go away.


The pulmonologist showed Azer what his X-ray looked like before and now and he was able to see how there wasn't as much cloudiness as there used to be. She listened to him, and while he sounded clear, she made him blow hard a few times, and she heard some wheezing. She thinks that his lower PFT's might be due to his asthmatic components, so she wants to add an extra inhaled steroid to his treatments to see if his breathing improves.
Two hours later, they retested his blood sugar. They now do this two ways, one by the prick of the finger, and the second sample is taken from his arm which is sent down to the lab and is considered more accurate. The technician had tried digging around at his veins twice and couldn't get any blood. The GI doctor asked Azer if was possibly dehydrated. He was... She recommended that he over-hydrate the day before labs.
Nearly every doctor, nurse, and medical student that came in stressed to him the importance of keeping his sodium intake high during the summer. The pulmonologist told Azer how she has had to admit other people with seizures because of low sodium. While he didn't have muscle cramps this time, he did experience some about a week later, and they were very painful. When he doesn't drink a sufficient about of gatorade during the day, we run it through his G-tube, and he walks around with it in a backpack for a few hours.
It has been about a year since his last scoliosos X-ray, so the doctor put in another order for it to get before we left. When we tried to check in for the second X-ray of the day, we were told they only did it later in the evening. By then, we had already been there for 5 hours, and we were exhausted and hungry, so we decided to come back for those another day! 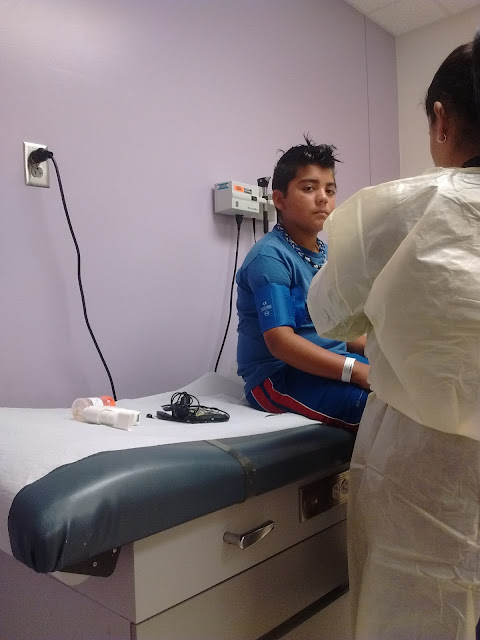 Since I was there, I was able to ask the pulmonologist more about the bone density test results. She said that, while it does appear he is on the lower end of the scale, they don't know yet if this is considered normal for a person with CF. They are still collaborating with other clinics for their data. This is a relatively new test they are doing, since they have noticed that since people with CF are getting older, they are having to address osteopenia and osteoporosis earlier. The dietitian came in and recommended that if his vitamin D levels are below 40, they will increase his dosage. They said he is getting more than enough calcium from his formula. The GI doctor noted that he is very active already and with his running, it should be enough exercise to maintain bone density. She said that repetitive exercises such as running and jumping help build and maintain bone density. She also said that the clinic is working on getting a physical therapist on to the staff to help addressing exercise.