"Well, I never thought I would say this" said our GI doctor, "but we need to back off of the formula a little...." Azer weighed in at 108 lbs today. She even said he could stand to lose a few pounds without harm. And while his weight continues to go straight up on the chart, his height is still not climbing back to his genetic potential. In a few weeks, we will see an Endocrinologist to see if he has a growth problem, and a need for growth hormones. The GI doctor said that if that's the path we chose, it will mean daily shot injections at home. While there is no direct health benefit for him to grow taller, it does mean better quality of life.

His stoma was a bit irritated, so an Ostomy nurse looked at it. His G-button is still fitting well, but she said if he rotates it throughout the day, and use some gauze under it, it should heal fine. 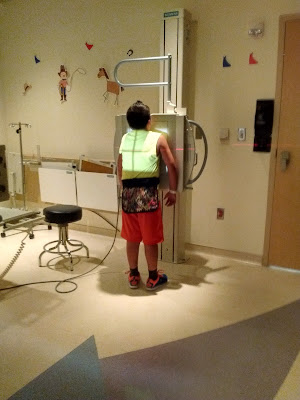 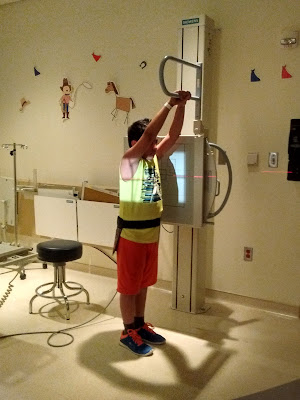 His Fev1 was 84%. His chest X-ray from today looked cloudier than the last time. His cough has been more frequent and junkier, but as anyone around here right now knows, the allergens in the air are very high. The Pulmonologist joked, "sorry dude, you're just allergic to like, everything, outside". So, that doesn't help his lung function. We agreed to see what he is culturing, and if he isn't culturing anything that needs attention, in two months if his PFT's are still low, we will go back on Tobi for 6 month cycles, just in case there is still some Pseudomonas lerking somewhere in his lungs. 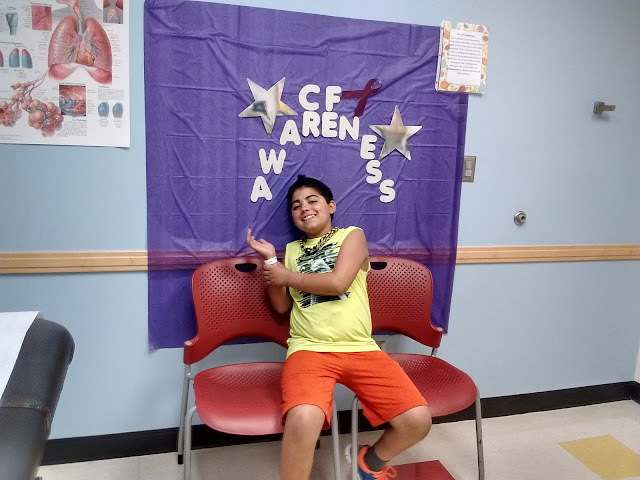 Also, May is CF Awareness month! The clinic put these up in the rooms, and encouraged us to take a picture to put on social media.

While we were waiting for X-rays before clinic, Azer noticed the mom of a blog I follow, whose son also has CF. They waved at each other from a distance, and smiled under their masks, lifted their shirts to show each other their G-tubes. Such a small gesture, but very impacting for Azer to see another that does many of the same things he does. He asked a lot of questions later on in the day about what the boy does that is the same as him, and what he has had to deal with that is different. I hope that someday, there doesn't have such a great distance between those who share the same burdens of this disease.
on May 03, 2016