The Bone Density Scan doesn't even need it's own blog post, but based on our experience today, I felt like it did.

So, at our last CF appointment, our GI doctor said he would need a bone age study to rule out growth problems and osteopenia. I didn't realize until today that he was actually having a bone density scan done instead. The orders to do the bone age study may be there, but I am not sure.

Anyhow, the nurse/technician was nice enough. She was trying to explain to Azer what she was going to do and why. He was having a sort of teenager-ish time, and was kind of giving her the "I really don't care how and why, let's just get this over with" look. So, I mentioned to him that we're getting this done so we can maybe find out why you're not growing very fast. The technician hurriedly explained to me that this is not what this test is for, and that it was to find out how dense his bones are. From everything I've read before, I assumed the bone density tests would start when he was 18, so I mentioned that. Her responses felt very argumentative, so I just stopped talking.

She first scanned what looked like his spine. She then had him sit up, and place his right arm on the table to scan it. When she was about to start scanning his right hand, she asked if he was right handed. I said that I was sorry, he is left handed in baseball, and most other things except for writing. I told her when he was about 4 years old (at that point I had no idea he could possibly be left handed) I taught him to write right handed. It wasn't until later when we began to play catch together that I realized he was left handed. By then, he was already pretty good at writing with his right hand, so it stuck. (I realized recently how left-dominate he is when we found out he is left eye dominate as well). She then told me that it can be very damaging for brain development to force someone to write with the less dominate hand. By now, I just decided to stop defending myself, and just looked around the room while the computer "measured" his bone density.

It was a pretty quick appointment, so he was able to go back to school for the rest of the day.

This evening, as I was going over today's visit in my head, I texted Azer. The screenshot sums it up lol. 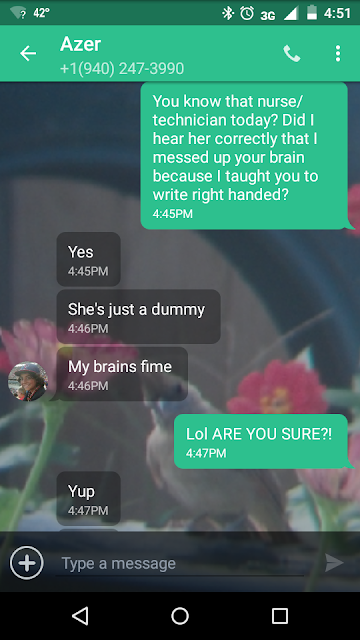