So, today was one of those longer clinic days. He had to be fasting starting at midnight for his glucose test today. They drew blood for a number of tests when we first got there. He then had to drink a few cups of glucose solution and wait two hours. 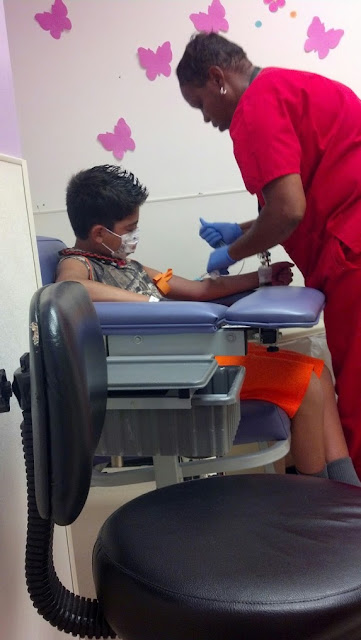 He weighed in at 86.8 lbs today! He gained almost 8 lbs in just two months. It appears the higher calorie formula is working! On the down side, he just didn't grow much at all, and hasn't, even since increasing his caloric intake. We will see an Endocrinologist in a few months who may have some ideas as to how to handle this issue. We hope his body will kick it in gear and start growing now that it has some extra nutrition.

About two weeks ago, we had a week of vomiting only in the morning. After switching his morning medications to afternoon, it seems to have cleared up, but he is still having reflux frequently. Because of this, the GI doctor wants him to have a gastic emptying scan to see if his stomach is holding onto food for too long. She also wants to do an endoscopy to check for any other issues that could cause problems.

He got an 83% Fev1 on his PFT. It's down about 10 points from last time. Because it seemed like the Symbicort worked well last month, we are going to start it back up to see if the decline is related to his asthmatic/allergic components.

After the two hours passed, they pricked his finger to test his glucose again, which came back normal. No CFRD! (CF related diabetes). Later on this week, we are scheduled for the gastric emptying study.

After fasting and a long clinic visit, we decided tacos sounded great. 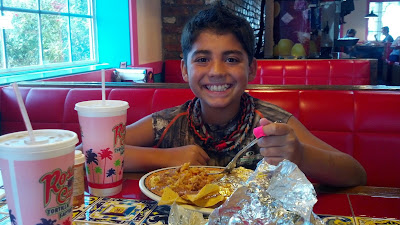