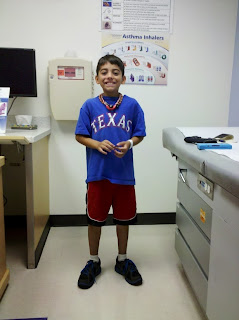 Well, today was our annual big CF checkup. Once a year, they do basically a head-to-toe exam on him. This includes yearly blood work and X-rays.

He gained a pound since his last appointment in May. I really don't know how since his appetite has been next to nothing lately. He grew a whole inch, which makes his BMI just a little lower, but overall, they are not too concerned with his weight.

His PFT (pulmonary function test) showed that some of the smaller airways are constricted. His FEV1 was only 74%. That's down from 92% in June. He definitely has some infection going on. He has been coughing up nearly green mucus. Not quite Nickelodeon slime green, but about that thick! He has been on oral antibiotics about once every 3-4 weeks. They are going to try another course of oral antibiotics to try to clear this up. Lets pray it works. If not, it's IV antibiotics. Yikes. 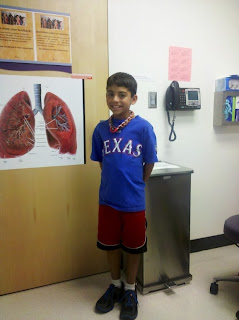 We had a few concerns with trying to work out keeping him hydrated at school as well as snacks and restroom time. Whatever he needs was written in a letter signed by the doctor himself. It's so nice to have a team backing me up and fighting for what he needs. 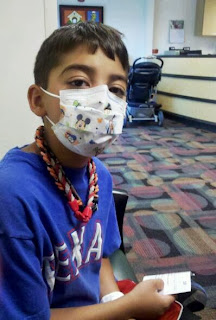 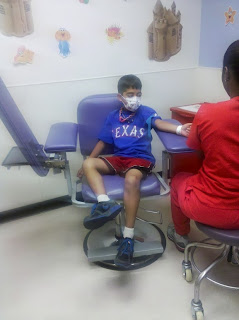 We waited about an hour to get his labs taken. He had been fasting all morning so they could get a glucose level. They took quite a bit of blood this time. He said he felt weak afterwards...

So, at his recent pediatric appointment, she noticed possible scoliosis. The doctor today took a look at it, and did see some minor curvature, and said we would keep an eye on it with periodic X-rays. Orthopedic X-rays were done on a different floor than we're used to. I couldn't help but feel just a bit sad, even though it is minor and quite common. I didn't know this before, but apparently it's quite common among people with CF. 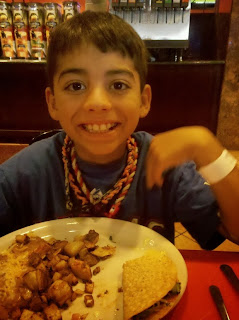 After 5 long hours there, and fasting since this morning, we went out for our lunch date afterwards. He definitely deserved it!
on August 29, 2013