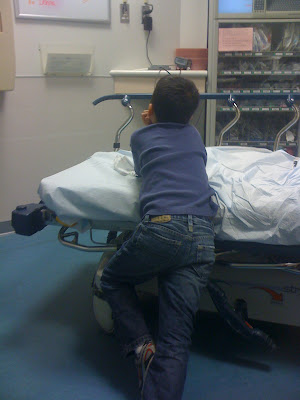 I took Azer to the ER yesterday afternoon. I kept hearing that weird wheezing noise every now and then when he coughed. It just totally terrified me, and I was afraid of what his lungs would look like. So, I called the CF doctor, and he said for peace of mind I could take him into the ER.

We were only there for a few hours, but we got X-rays done. The first nurse who listened to him said she heard wheezing in his lungs. About an hour later, the doctor who listened to him said he sounded clear. Azer says, "You know those doors to the hospital? Their like magical doors. As soon as you walk through them, all your sickness just disappears." It seems this was kinda true yesterday. His X-ray was mostly clear, but another doctor said it looked the same as the last one. The last one showed pneumonia, so I'm not exactly sure what it looked like.

I was then given a choice to admit him, or to try the antibiotics at home like previously planned. I chose home! Anything to not be there at the hospital. I really hate it when the doctors ask me what I want to do. I don't want it to be up to me. Their the doctors!

So, I'm praying the antibiotics clear up this wet, mucus. But, I'm also praying that he doesn't get C-diff issues again and have constant diarrhea like last time. That was not fun. I want this kid all cleared out in time for baseball! We might (weather permitting) have our first try-out/practice next week!
on February 06, 2011

I would have chosen home too! Hospital stays are never fun. Hoping Azer feels better soon!!

Ugh. :( Sorry about the ER visit. I know it's so hard to go through this. I wish I could read X-rays too! Dealing with CF makes me want to go to Med School - just so I can gain control over what is going on around me.