Well, last night, the bag of formula for his night feed got a clog in it somewhere, somehow. All I know is, I just couldn't get it to run anymore past 10pm. So I brought in a new bag, and filled it with new formula. It had already been running at least one hour, so he got a little extra formula, but not that much.

Usually his night feeds run until about 3-4am. Because of the clog problem, his feed finished at 6am, which is the usual time we wake up for school. He sat up, and told me he could feel the liquid in his stomach coming up, higher and higher. He took his enzymes and morning medications with water, and he kept drinking water, because usually it helps keep the stuff in his stomach from coming all the way up. It didn't work this morning. I'm not sure how much of his feed he lost, but luckily he was able to get it in all in a trash can, so there were no messes. Yay...

So, I waited an hour, and just before we left for school, I gave him his bolus feed. He was keeping it down fine. While I was pushing the formula through, I noticed his Mic-key button looked loose. From time to time I check to see if the balloon is missing water. So, I laid him down on the floor, and checked, and there was very little water in the balloon. It's a wonder it didn't leak around the stoma. Well, that button is still the original button they put in when he had his G-tube surgery in June. So, I figured it was best to just change it.

So, I told him I'm going to put in a new one. We have discussed it before, so he knew how it was going to be done. I walked out of the room to go get the kit that includes a new button and gauze. When I came back, he was all in tears. He was afraid it was going to  be very painful. I was afraid I wasn't going to do it right, but I tried not to show it. So, I made sure all the water was out of the balloon, grabbed a towel and pulled and it slid out very easily. I think it came out so easy because there was a bunch of mucus around it. I was kind of fascinated at Azer's "breakfast" bubbling out of the stoma. It's kinda cool in a gross way. The new button slid in just as easily, and I inflated the balloon, and flushed it with water to make sure it was in properly.

Azer was said it didn't actually hurt, that it just felt weird. I can't even imagine how that feels. The whole process took less than a minute and we were out the door. Around lunch time, his teacher told me he was showing it off, going, "Look, I got a new one!"

Back to the reflux. He is keeping water with him all day for today. I wish he didn't have to suffer like that. It's bad enough to feel it constantly shooting up, but it's just no fun to throw up.

Oh ... this is the old button. A brand new button is all clear, so I'm guessing the stomach contents change the color of it over time. 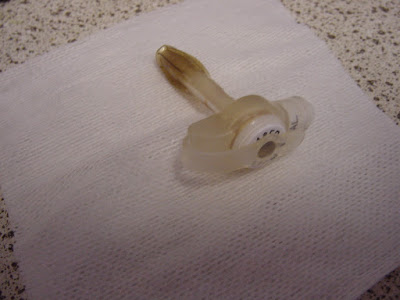 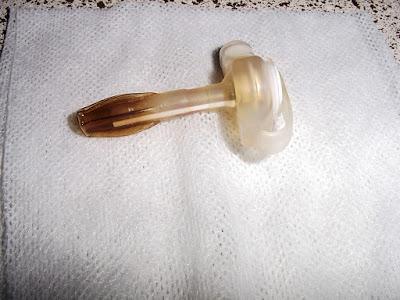 And here it is with the balloon inflated. It still inflates, I think it might have had a slow leak. 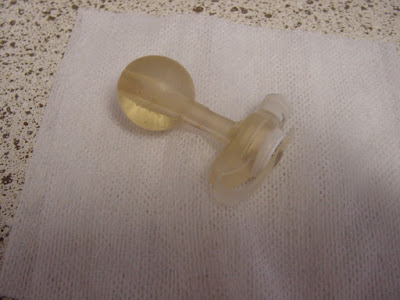 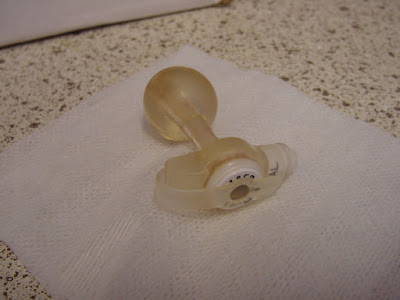