Just where I wanted to be in the afternoon after school. And it was almost entirely my fault. 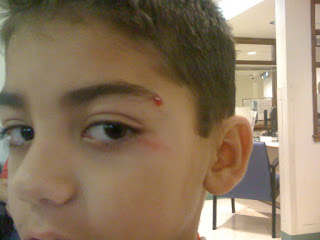 Usually after Azer exists his school, he comes running full speed at me, and hugs me, and then proceeds to drop his backpack and water bottle on me. Well, I was trying to squirt the remaining water in the bottle onto him. He ran laughing away from me. He turned around near the wall of the building, and just as I squirted water on him, he jerked his head back, and banged it into a pipe, sort of thing sticking out of the school. It gave him a good cut right on his eyebrow. No stitches, just glue. So ... at least once in his life, he had the opportunity to visit the ER for something that a normal kid would.  We are going to stay away from brick walls with odd pipes sticking out of them now.
on January 24, 2011

Email ThisBlogThis!Share to TwitterShare to FacebookShare to Pinterest
Labels: Er

Oh my - I'm glad he didn't need stitches! This totally sounds like something we'd do lol. Glad his tummy issues are getting better too.

We've been so busy we haven't blogged much, so sorry to hear that your guy has been sick again! I hope your buddy is feeling better soon!!

We've been so busy we haven't blogged in a while.Sorry to hear your guy has been sick again! Hope he gets feeling better soon!