Azer had a CF clinic today. He gained a pound. He is officially over the 20 kilos mark.

He has not been eating very much, but he has been having no trouble with his milkshakes. The milkshakes apparently are working very well (as long as they don't have heavy whipping cream in them). His stools have been looking nearly normal, which is pretty much the first time in his life when he has been absorbing this well. The Scandishakes seem to be incredibly easy for his body to absorb, as long as ol' mom here doesn't try to put anymore whipping cream in anything. You think you're doing good by your child, and then ... guess what, you were trying a little bit to hard. Azer ate Pasta Alfredo the other night. When I say that he ate it, I mean he had a few bites ... like around a fourth of a cup of it. Within an hour, he was in the bathroom. I soon found out that they make it with heavy whipping cream. (Can you tell, I don't cook much? Apparently a lot of people already knew that).
His PFT (Pulminary Function Test) was only 85% FEV1 today. However, for some reason he kept coughing during the test. It made the doctor think that he was getting sick, but I tried to tell them that this was the first time he has coughed like that in about two months. They did a throat culture to test for Pseudomonas again. If it comes back positive, the doc wants us to try Cayston, which is a new inhaled antibiotic that works like Tobi does, but it is a different class of medication in that it isn't supposed to have any hearing loss risks.
Azer has had no paleness within the past few months. Usually, if he is eating poorly, he tends to get ghostly white, but his color has been excellent. And his energy is fantastic. 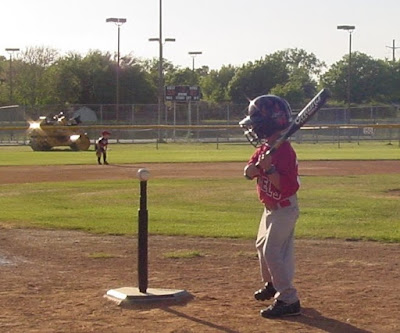 It makes tagging people out at first base easier. He is loving that position. 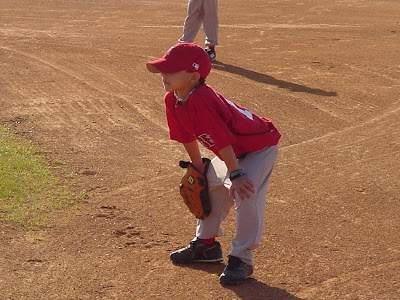 Someone asked him today if he would be a pitcher when he grew up, seeing that he was left handed. Azer said, "No! I want to stay at first base ... forever." 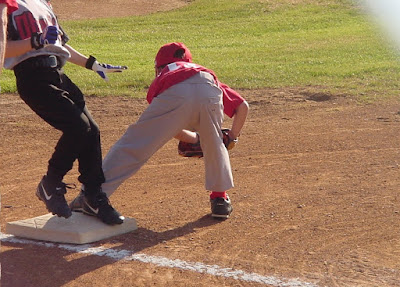