As I was putting a belt on Azer this morning (his pants are always falling down, that dude has no butt whatsoever) I discovered that I couldn't tighten it to it's usual hole. In fact, the belt fit snugly about 3 belt holes down! And this was before eating breakfast, so there was no stomach bloating involved. I was amazed. I hope to see weight gain at his next CF appointment. :D

I moved Azer to the bottom bunk of the bunk bed yesterday in preparation for the Tobi. Since we can't run Tobi during his vest, treatments are going to be a bunch longer. This is difficult in the morning. So, we are trying to do treatments in the morning before he has to get up. I'm hoping he can fall back asleep while it runs. We're giving it a trial run and see if it works. 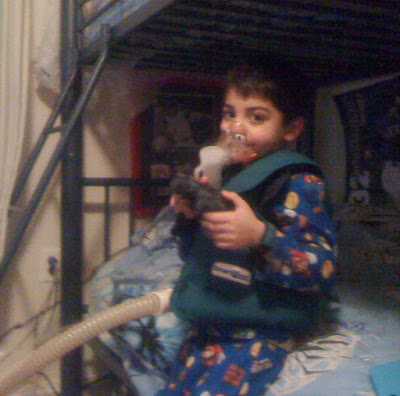 I hope I will get the Tobi and Scandi-shakes tomorrow. I'm apprehensive about the Tobi. The respiratory technichan told me he may appear to be getting a cough during Tobi treatments, but that this was normal. Other CF people online told me they feel "ill" in a sort of way when they are on Tobi. It seems to defeat the purpose, in a weird way I guess.

Azer had T-ball practice last Friday and Saturday. He did very well for being only a few days out of the hospital. The coach was impressed with the accuracy and distance of his throws, so Azer may be put on 1st base, or short stop. I heard some dads behind me making comments about his throwing skills when it was Azer's turn to throw a ball to the coach like, "Huh ... looks a short stop right there." Yeah ... I'm a boasting, proud mama.
on February 22, 2010