So, because Azer cultured Pseudomonas, he will be on inhaled Tobi for the first time. He will be on it for 30 days, and off for 30 days. They do this to prevent the bacteria from developing a resistance. I was surprised that they wouldn't treat the MRSA unless it was causing symptoms.

I am a bit worried about the hearing loss risk, so if anyone has advice about that, I would really appreciate it. We are going to need to start waking up earlier to do treatments before school, because you're not supposed to do Tobi during the vest treatment. We want the medication to stay in his lungs, not get shaken out. I looked up the price of Tobi, and wow. It is even more expensive than the Pulmozyme (dornase alfa). CF kids are expensive!

Azer had a great day at school. Everyone gave him a hug when he got in his classroom.

In the hospital, Azer was drinking milkshakes everyday. I think that was partly due to the milkshakes he was drinking during every meal. So, we are doing the same thing at home. He doesn't really care for the milkshakes with Carnation Instant Breakfast mixed in. That stuff does taste like liquid vitamins, but I thought he wouldn't be able to taste it through the chocolate ice cream. Oh well. He is drinking a milkshake at school for a snack instead of slowly chewing through like 5 potato chips for an hour. Everyone at school is very supportive of everything. The school nurse is like a champ in getting him to drink his milkshake! 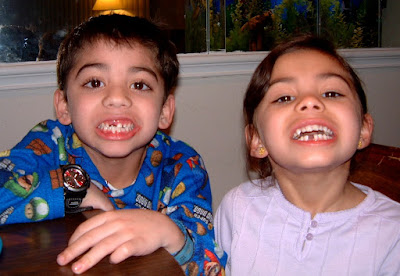