Since the last post, he has gained very little weight. He weighs nearly the same as he did last year. He has grown, but has not gained any body fat. He's going though the "not really hungry" situation. Meal times have been frustrating as they seem to go very s-l-o-w-l-y.

On the other hand, he hasn't needed antibiotics, and hasn't gotten any colds or lingering coughs. He is happiest when he is not being pushed to eat. So we try to keep that to a minimum. With increasing height, he is also increasing in handsomeness. ;)

They had open-house day at our local police station. I think he needs to grow just a little bit more before signing up... 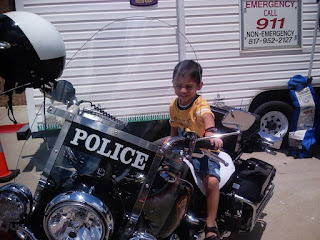